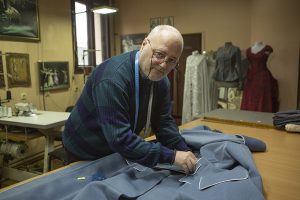 A tailor from a young age, or has the desire for this job developed over time?

I believe that everyone’s life is determined by birth, and so is their occupation.

My first encounter with some kind of tailoring and material shaping was back in the early school years. I remember that my art classes were my favorite, and as a kind of art work, a collage of fabrics. Like any child, I had a lot of different ideas about what I would like to be when I grow up, but I think that fabrics still remain as something that is destined for me.

My definite commitment to this type of work is that I was more and more interested in making old folk costumes that fascinated me with their beauty and the way they were made. It was very difficult at that time to find out how folk costumes were made. There was not much literature, nor the Internet as nowadays. Back in elementary school, in addition to my obligations at school, I started helping in the tailoring workshop with my aunt, where I gained some more knowledge, and the secrets of the tailoring craft slowly began to open up to me.

The time has come for further education. My love for tailoring and designing was to continue art school enrollment. Unfortunately, my parents didn’t understand my decision. Back then we had to look at what work will follow after school, and this wasn’t some occupation. That was frivolous for them at that time. But I didn’t give up in my intention to learn the craft of tailoring. The folklore section is also responsible for my further development in this business. In addition to recreation and travel, I learned a lot about costumes and different styles, which may have contributed to the fact that I prefer a costume from a historical period.

It’s interesting that everything slowly falls into place when there is a great desire and love for something. I was unfamiliar with how to prepare the thread and the production process of folk vests. I learned to this in a very strange way. I was serving the army in Skopje and while walking around the city I saw a costume shop, came in and started asking questions, how this, how that. I guess that craftsman was also interested because someone was asking questions about something that is dying out, and so little by little he explained to me everything I needed to know. After this experience, I was able to deal more thoroughly and with better quality in making folk costumes, which is still a great love in my work.

You started your working life at the National Theater in 2001. How would you describe those first days and the adjustment period?

My relationship with the theater, that is, with the stage, began about ten years earlier. At that time, along with my friends I played as an extra and in some roles in the shows. Those were among the most beautiful moments of my life. Even then, I had a secret wish that I would like to work in the theater, exactly in the place where I am now, not realizing that my wish will come true someday.

In 2001, unfortunately, two great masters of their craft, Master Toma and Master Velja, as everyone called them, left the theater forever in a short period of time. The theater was left without a tailor. Urged by my godfather, I entered the theater in the spot I then wanted to start at, as an assistant. Until my qualities are assessed. I remember that the first costume I worked on was for the play “Antigone”, by Student Theater, and that was my probationary period. I did well and got a job as a male tailor. There was nobody than me. In the beginning and onwards, I didn’t have any difficulties in my work, because as I have already stated, I knew all these people from before and they were all kind to me. It was a good start. The only thing that mattered to me then was to be a worthy replacement for the old masters. I had great support in the beginning, and even later, from my colleague Snezana, who unfortunately is no longer with us.

In the beginning, I was very nervous when a tailoring rehearsal should be done. I kept wondering if everything was as it should be, if I had sewn something wrong somewhere, but in the end everything would be as it should. I believ I also had actors support, because I never had problems with them. They would also give me advice. Over time, I learned who needs what, and what requirements they have, and then everything became easier.

When we talk about working in the theater, you represent the people behind the stage, in a special way. How would you describe the costume creation process, from the idea, to the premiere?

Working in a theater is very different from working in some other institution. Every sector in this house is interconnected and important and so is the tailoring workshop. Many things, apart from the costumes, depend on this workshop, such as curtains, floor mats and much more, which are physically the most difficult work, and not creative. Costume is something that presents pleasure in this line of work, and if it is also historical, then it is a total win.

If we talk about the process of making costumes, there are several stages. For every part of the wardrobe being made, a good knowledge of the period from which it originates is required. In addition to the costume designer who has an idea and an artistic view, we as tailors must know something about the period in question. When the costume designer brings the sketches, then we approach the detailed elaboration. We talk about the type of material and the variety of cuts, where our skills and knowledge come forward. Based on the idea, we also give various suggestions, because we know our actors best, which I have already mentioned. Each of them has their own habits and requirements related to the costume, and even superstitions. Our task is very important here. To keep the idea and fulfill the wishes of the actor, which can sometimes be very complicated. When we agree on everything, it goes into production. First and foremost, the purchase of materials, which can cause headaches, especially with historical costumes. The cuts themselves are not a problem. Tailoring and preparations for the tailoring rehearsal begin. These are rehearsals at which all remarks and suggestions are presented, both due to the functionality of the costume and in the artistic sense. Correction or finishing of the costumes follows, and if that is not the case, the satisfaction is greater. The next costume rehearsal is when the costume is ready and for the first time the actor goes out to rehearse in a costume. It happens, but rarely, that there are some corrections here as well, maybe something tiny that we overlooked during the tailoring rehearsal. When those corrections are made, the costume is completely ready to be worn on stage and we can all happily welcome the premiere.

The costumes give a signature to the performances and carry a visual identity. Can you single out any of the many shows you worked on that left a special impression on you?

Like scenography, the costume gives a complete picture of a play. There have been many performances in my working life so far. Some were less successful, some more, but all in all, each had beauty in a certain way. If I should single out the performance that left an impression on me, I’m not sure which one I would choose. Each show is something special for itself. Maybe I would single out the play “Taming of the Shrew”, but not only in visual sense, but also in terms of the fact that it gave me the wind in my back to work harder and work on perfecting my costumes. At that time, I was a tailor with little experience in the theater, and I was given such a demanding task. Besides being happy, because I was working on such a beautiful costume, I felt a kind of fear. I cared more, because the costume designer was Ljiljana Petrović – a professor at the AAA, who is very demanding. I have fond memories of this plays’ work process, we worked day and night, sometimes we used to rest on chairs, and then continue working. A lot of work was done there, but the show itself was fantastic. In addition to this one and many others, I will have to single out the play “Violinist on the Roof”, where a lot had to be done in a short time. It is fascinating that I didn’t notice about 150 garments being made. It is proof that when something is done out of love, nothing is difficult.

You have worked with many directors and costume designers. Who left the strongest impression on you and why?

Many directors and costume designers crossed my path during these, close to twenty years of work. It’s nice to work with different people, that’s the way to learn something new and advance at work. It is difficult to single out anyone in particular, but out of many directors I have met, I would single out Milan Karadzic, not only because of his work quality, but also because of his relationship with people. It never happened that he addressed someone without a smile and kindness. And if something wasn’t right, he solved it in a calm tone, which is a rarity nowadays. When we talk about costume designers, it is already a problem whom to single out, without offending anyone, because I have remained in a friendly relationship with everyone. I think that says it all, but I will say something anyway. Ljiljana Petrović, although very demanding, is a successful costume designer and her works have a special story of their own. She is someone who helped me to be heard outside the theater. So she recommended me to make costumes for the first Serbian museum of wax figures. Our dear Milica Grbić-Komazec is a very good person and a great costume designer. I can single her out by the fact that in addition to the artistic part of the sketch, she brings everything elaborated in detail, so there is not much to think about the cuts. Marina Medenica, with whom I recently worked for the first time. A woman of cheerful spirit, also known as Medena (Sweet), because only her last name tells her what kind of a person she is, and also an excellent expert. Tanja Radisic, very strict, demanding in her work, but justified, because the difference between the sketch and the costume is almost non-existent. I could say a little something about everyone, but it would be too much.

What would you have told yourself twenty years ago?

Twenty years ago and now I think the message would be the same. Do what you love, because without love every job is hard. I believe that’s why I’m advancing in at work, since I was a child my wish was to work in the theater, and it came true.