On September 14, at the closing of the Festival, the audience will have the opportunity to see performance LIFE PLAYED WITH ME A LOT, Citizens’ Association “Novi tvrđava teatar” in cooperation with Novi Sad Theater “Ujvideki Sinhaz”, Novi Sad, Serbia, which will be performed in honor of the awarded.

In addition to the above, the audience in Nis will have the opportunity to see three more plays from the surrounding countries: Kons: A New Era, based on the poetry of Srecko Kosovel directed by Ziga Divjak, produced by Preseren Theater Kranj from Slovenia; then Watch Out for the Void, an authored project by Roman Nikolic, produced by the Croatian National Theater in Varazdin, and Calderon’s Life is a Dream produced by the Theater “Zong” from Bulgaria, adapted and directed by Dina Markova. In the spirit of topics that have preoccupied us over the past year, the focus of the setting of Calderon’s famous work Life is a Dream is on the experience of the physical. Despite the fact that in addition to sporadic, noteworthy stage works, physical theater still fails to establish itself institutionally in our country or environment (unlike, for example, dance and choreographic stage), we can assume that an increasing number of younger authors, due to the noise of modern life (primarily media), will dedicate themselves to the research of bodily expression. The research character of the increasingly present format, the so-called authored project, such as the play Watch Out for the Void, also testifies to the loss of trust in word, speech, and the order of reason (logos), replaced by a sequence of partially connected scenes. In addition, the play by Roman Nikolic is characterized by a valuable met theatrical plan, from which a question about the situation of coming to the theater, performing and observing events on stage, as well as distinguishing reality from fiction arise. And finally, the most poetic and most avant-garde play in this year’s selection, Kons: The New Era, will give great pleasure to those who indulge in it, while its post-apocalyptic atmosphere echoing Kosovel’s verses probably most directly oppose the concept of “New Normal”, which the current techno-fascism conseals. 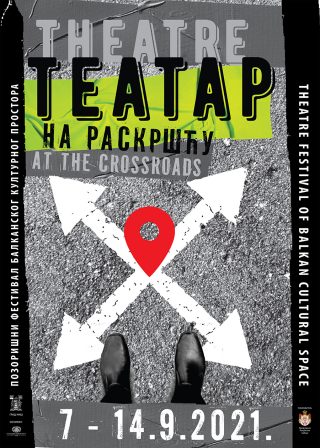