The National Theater in Nis presents another in a series of interviews with employees and those who contributed to the development of our house with their work. During the conversation with Nelica Milošević Stankov, the technical secretary of the Theater, we had the opportunity to learn more about Daniela Trajković Ivanović and her many years of work. 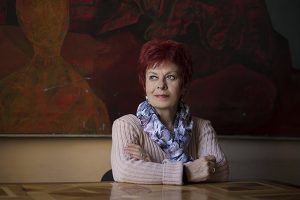 How did Daniela Ivanović’s story begin at the National Theater?

The love between my parents was born in the theater. Bora Trajković, Assistant general manager, Secretary and Acting general manager in the period from 1949-1977, mother Radmila, a member of the theater choir in 1955/56/1957, later a Box office manager, are guilty, in the best sense of that word, of my attachment to the theater. Growing up in the world of art, it was natural to sail into that world. Unfortunately, only after their untimely deaths, in 1986. The beginning was full of sadness and gradual adjustment …

In what job did you start your career and how long did it take you to position yourself?

The first job of a documentary filmmaker was designed by the director Miroslav Radisavljević. He has an idea to open a department of the theater museum at the National Theater, where, in addition to collecting and systematizing theater materials and publishing plays in theater literature (publishing), actors poetry evenings, tribune,  small theater forms would be held. That all-encompassing idea did not come to life, but its parts did. Thus, since 1997, I have been the editor of the Theater Yearbook (on the initiative of the former General manager Biljana Krstić), while managing the Actors’ Poetry Evenings on the initiative of the current General manager. Among other things, I also worked as a legal officer and theater secretary, and in the marketing department since 1992. There I changed a couple of jobs: from sales organizer, through head of marketing (10 years), to head of marketing sales. Presently I work as a producer in art and media. Whatever the name of the job, my job essentially involves putting together a monthly repertoire together with the General manager and its fulfillment. Managing contracted associates, guest performances of the theater in the country and abroad, as well as guest performances of other theaters here. I nurture the audience, assuring it of the value of the actors and the shows, with natural ease.

So many experiences bring many memories. What do you remember?

There were a lot of beautiful moments in my long theatrical career, aside to the fact that serious work preceded them. The crowns of our work shine in my memory. I single out some of them: Celebration of 105 years of the National Theater in Nis (several days of activities with great and important personalities from the cultural world), Festival “Joakim Vujic” in 1998, connecting of the Embassy of Chile in Serbia and our theater in 2000, when on my initiative, NCC organized the Days of Chilean Film in Nis. On that occasion, I was a guest at the celebration of the International Day of Chile in Belgrade in 2001. From that encounter, one more merger was born – my proposal for GSLU to organize the first exhibition of Peruvian painters was accepted by the former director of the GSLU Aleksandar Devic. Glumbal Festival 2011 (The first Balkan theater festival dedicated to the actor), Promotion of my monograph “Bora Trajković – Behind the theater curtain” as part of the celebration of the 130th anniversary of the National Theater, 2017. Festival “Theater at the Crossroads” in 2019, then the invitation of the Japanese embassy in Serbia on the occasion of the celebration of the birthday of the Japanese Emperor Hirohito 2020. As I write about these events, I come to a conclusion that there has been no task for the marketing department set by the general manager that was left undone…

Everyday work with colleagues in marketing, with actors, technicians, general department colored my theatrical life. Theatrical friendships make it happy and rich. And all the inevitable conflicts, misunderstandings, controlled and uncontrolled, fade before the most important one, and that is a calm theatrical sustainibility..

Can you single out the special moments and the people who stay in your memory?

I am extremely proud of my Coryphaeus, father. The teachers engraved in my being are: Gradimir Mirković, director and house friend, and plays directed by him “Ivko’s slava” from 1971, “Kostana” from 1972. Then a particularly miraculous dialogue between Đorđe Vukotić in the role of Hadži Toma and Zorica Stefanović in the role of Stojan’s mother. Great actress Mima Vukovic Kuric, actor Dragoljub Markovic, my great friend, as well as Slavica Knezevic, actress and friend, Radoman Kontic, bohemian and a poetic soul. Slavka Ilić, a colleague and more than a friend, and Nelica Stankov, technical secretary, with whom I have been cooperating the longest. I was enriched by encounters and conversations with the playwright Aleksandar Popović, Nebojsa Bradić, Nikita Milivojević, old theater wolves. I enjoy talking to young actors, caught in the trap of the theater virus, in collaboration with colleagues from other theaters in the country and abroad. I love my job.

152 premieres, 17 general managers. From Brane Vojinović to Spasoje Ž. Milovanovic. Under the auspices of Talia, my spirit and I did not stray, fortunately.

What would you tell yourself from 35 years ago?

Girl, start developing the ability to deal rationally with the demands and pressures of the work environment as soon as possible.