Milos Cvetkovis, actor, award winner of the best young actor at the Days of Comedy in Jagodina in 2014 for the role of Nino Vanjak (“Great Maneuvers in Narrow Streets”) and artistic director of the Academic Theater in Nis, where he directed several plays, tells us about his acting experience, theater and the upcoming premiere of the show “Divisions”. 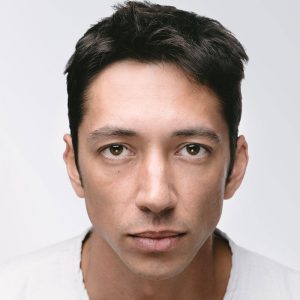 Do you remember your acting beginnings and what attracted you to this profession?

I remember, yes. Now, what attracted me… There were probably some indicators during elementary and high school that I had an affinity for it, but not for a second during high school did I actually think that I would do that professionally.  My primary idea was to study medicine, and afterwards what attracted me to acting was not to study medicine. I fell in love with that profession, not like everyone else before college, but during college, that is, already in the second semester of the first year, and thereafter there was simply no going back.

What role made you feel the best so far as an actor?

Somehow I’ve never measured roles in a sense, which one makes me feel better or worse. I’ve felt equally good in each so far. But again, there must be one of those roles that is “most comfortable” for me. In a strange way, for now, the most comfortable for me were the villains and those are the characters from the plays “Dear Jelena Sergejevna”, “In Whose Name”, “Fight Club” … So, some antagonists who pull the story to the other side.

And is there a role that is attractive to you and in which you would like to try yourself in?

There is, and if I think I’m doing it, I’d have to do it as soon as possible, because my age for that role will pass by quickly. It is the role of Ned Kynaston in the play Compleat Female Stage Beauty. He is a historical figure, he was an actor in England at the time when the King of England at the time made the decision that women could be actresses and be able to play on stage. And he was the best actor who played female characters, and then, practically after that decree, although the biggest star, he lost his job.

From the perspective of the artistic director of the Academic Theater in Nis, to what extent is this theater a nursery of talents and how important is it for the acting scene of the city of Nis?

That theater is, to the greatest extent possible, a nursery for young talents, because every year a certain number ˗ not individuals, but a number ˗ enrolls in academies in our country, and outside our country and in the Republic Srpska. Therefore that theater was equally significant at the moment it was created as it is today, all 60 years. The repertoire of alternative theater inevitably differs from the repertoire policy of a national theater, and there we have the right to do what we want, which is very important. During Corona there were online festivals. Festivals in Novi Sad, Kragujevac, etc. were held and we won 3-4 awards at all those festivals again. I think that we just need to pay a little more attention to that theater because it is the most successful student theater in our country, and I think in the entire region, and people do not register it as much as they should.

Tell us a bit more about your directing experience, do you have a favorite project or show you’ve worked on?

I directed three plays at the Academic Theater and I really can’t single out any of them as the most important, because each of those processes was very, very exciting and I like to do that. Now, do I know – that is something else. In that sense of directing, I have a few wishes, but for something like that, a certain amount of time should pass and certain conditions should be met in order to see if they will come true. 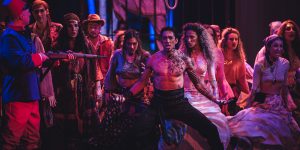 You recently had the premiere of “Divisions” in the SNT, and on April 9, the premiere is awaiting us in Nis. What can you tell us about the show, and what about the character your namesake you interpret?

I can say about the play that it is certainly something that will be refreshing for our audience at the level of the whole country, because the aesthetics of that play is very specific and different in relation to what has been happening on our stage in recent years, so I think that the audience will be surprised at the very least. And as for my character, my namesake, he is a significantly younger man than I am, full of energy, his beliefs, his understandings. Because of his understandings and his own youthful ideology, he defies his father and that is the main reason why there is a split in the family, and thus the division within that certain family and generally the conflict and problem in the play we perform.

How did you prepare for this role and to what extent was it challenging for you?

Well it was just as challenging as any other, the process is always more or less the same. What was different was the meeting with the new ensemble and with new partners on the stage. I think it’s very important for an actor to have new partners on stage, because those are some other energies, other ways of thinking, other perspectives. Therefore, in the conversation with colleagues with whom we worked on the play, we came to nice solutions, to nice conclusions, because the atmosphere inside the ensemble in this play, although we practically didn’t know each other, was very good. And that then resulted in good relationships on stage.

Your colleague from the ensemble of the National Theater in Nis, Dejan Cicmilovic, also plays in the play. What is the relationship of your characters?

The two of us don’t meet on stage, at one point he talks about me, about what my character did, but we don’t meet. On the other hand, our starting points are completely different and our ideologies are totally opposite. So he is a supporter of one side and I of the other.

And what do you think privately about your older colleague?

They don’t make them like that anymore and that’s a great pity.

What are the similarities and differences between the SNT and the National Theater in Nis ˗ from the production process to the architecture of the theater building?

I have no experience regarding production in the SNT. This production was certainly different from their way of working because it is a co-production, which includes two other theaters in addition to the SNT. It was in itself different from any other production within a theater. Now, I honestly don’t know how they work, because I haven’t done a single play in their theater without it being their production. The stages in Novi Sad are quite different from other stages in our country because the opening of that portal, ie the width of the scene is 2 to 3 times larger than the width of any other stage in our country. And then that scene can be used in various ways in relation to the Nis Theater, for example, or any other. Depending on the size of the play, the way it was created in terms of mise-en-scène and scenography, one theater will have an advantage, and one a disadvantage and vice versa. Some performances that will be super visually and aesthetically able to “lie” inside the space of the National Theater in Nis might have a problem in the SNT because they would probably be too small for it, and on the other hand, performances that can spread on the stage The SNT will surely lose in that aesthetic sense in our theater, simply because it is different and smaller.

What other profession would you pursue if you were not an actor?

I would do anything. I believe that whatever I chose I would dedicate myself to, and I also think that it is not necessary for a person to choose only one profession. I think that a person can be fulfilled in different professions in parallel, and that is otherwise important for acting itself. One needs to have many different hobbies and other interests in order to be more fruitful in acting, because acting is, after all, an imitation of the truth from our lives. If we bury ourselves only in acting and seek only acting on stage and not in life, we will be left to revolve only in one circle of the known and that should then at some point cease to be true and real because we have no new influence or some new information from the outside world, which must actually be our inspiration.