Home Theatre Plays WHERE WERE WE

Marjan Todorovic Maksa (1979, Nis), graduated Acting at the Faculty of Arts in Pristina in 2006, in the class of prof. Svetozar Rapajic.

He is a permanent member of the Drama Department of the National Theater in Nis.

He has played over twenty roles in theater, television and film.

Nis Art Foundation, second prize in the competition for a short drama on the topic of Nis, for authoring of the one-act play “Ees Fashion”;

International Literary Festival “Days of Poetry”, Novi Sad, first prize in the competition for the best slam of Serbian poets in 2010 and 2014 and second prize in 2012;

The Hartefact Foundation, Belgrade, the drama “Zer0”, together with other top four in the competition for a contemporary drama text, was printed in the collection “Workers Die Singing”;

Sterija’s Pozorje, Novi Sad, the drama “Mmm … where were we” is one of the top five in the competition for a contemporary domestic drama text.

The text “Ees Fashion”, along with two other awarded texts, was staged in the form of a triptych in 2008 under the common name “Selected and Destroyed”, directed by Kokan Mladenovic. The play “Mmm … where were we” is his second authored drama staged at the National Theater in Nis.

A word from the Author

WHERE WERE WE, unfortunately, for a long period of time is no longer a question at all, but only a passing statement. It’s like when a man blocks his own opinion and attitude for a moment, and between what he started and where he is going with it, he uses the phrase “… ummm…  what I ment to say…”, until he actually gathers in the coordinate system of his own confusion, and LIKE proceeds. In fact, somewhere along the way, he completely lost the essence of the story he started and unintentionally wandered into that self-suggestive LIKE, which he then unconsciously begins to project as a personal life philosophy:

The idea of ​​this piece is that through the stories of various types of people who loudly live their LIKE as their own, one accidental unfortunate guy only intimately roars his most sincere AUCH!

Hotel Kosovo , based on his own drama – NT Pristina in Gracanica, 2014

Unification or death in 1918 according to documents (co-direction), – NT Pristina in Gracanica

If you wake up or as if it matters by Isidora Milosavljevic – NT Leskovac, 2019.

He won the award for directing at the “Joakim Vujic” festival for the plays Home …! and Lieutenant from Inishmore and awards for the best text at the “Theater Fest” in Banja Luka for Hotel Kosovo.

A Word from the Director

Where were we? We wash up and move on. A pause for a sigh, for the thought “what do I need all this for,” and forward to the end. This is what this piece looks like at first glance. Devil, rise, deception. It’s not about that. The question being asked is when we stopped. Question which is no longer active, no one even remembers when and why our merry carousel got stuck in the mud. The Serbian carousel is buried and still spinning through the center of the earth. While, licking caramelized apples, we buy tickets for the next turn. Sweetened, we wait for our next turn. Straight on curving in circle. Straight on.  Our society is as we are. Without error and shame. Perfectly flawed. But our hero, the enumerator, unlike Joseph K, has a chance to remain innocent. We don’t have that German discipline to go through just about every victim twice. He has a chance to see the light at the end of the tunnel, because in Serbia trains go rarely and slowly. 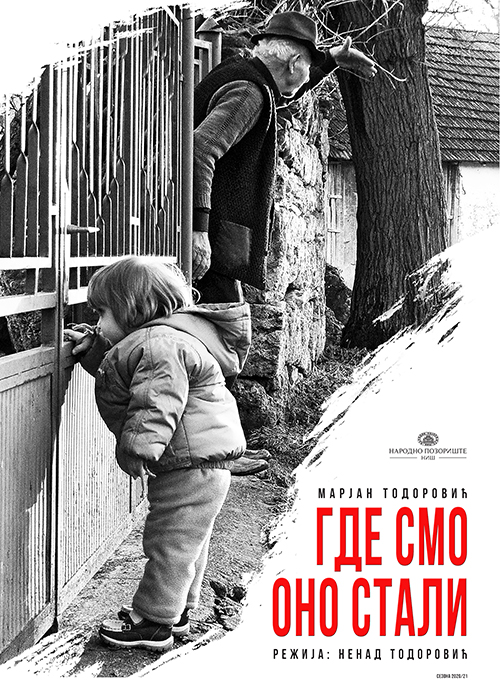