Where Did Kharms Disappear

This theatre play is a deep scream for freedom, both social and personal. It speaks of the growth and decline of a free man who, in his own special way, fights for freedom in a dictatorship, in a rotten, insidious and hypocritical society. It is clear that a free man is the biggest and the worst enemy of the government, the regime government in particular. And in all those big dictatorships there is no room for absurdity and senselessness.

Today, we live Kharms. If we only changed the point of view, we will clearly see that everything around us is grossly pointless and we will realize that this is our reality. Working on Kharms is a pleasure and a challenge at the same time. His personal life and his creativity are one big world; special, strange, distant but quite close to us at the same time. That world of his is also our world, that struggle of his is also our struggle; in a way we are all Kharms. The theatre must not remain indifferent to a life in such a dirty world where all norms are disturbed, where everything is shifted, where everything loses its sense, where everything is masked and hidden, where freedom disappears and everyone slowly accepts it. It has to ask big questions, it has to fight, to follow all social anomalies and comment on them, but at the same time it also has to give hope that it may be somehow different, which is its essential goal.

In this play our world is made by mixing reality and absurdity, life and magic. This world of ours has no boundaries, we strongly comment on it, we ask big questions in our own way, which we believe to be interesting and direct. Our performance does not offer answers, just asks questions, cuts to the heart of all segments of life, starts special stories, and tells us about everything that surrounds us. The escape to comedy is just a hideaway of a deep tragedy.

Kharms opens up a vast space for everyone to find their way and  start talking about what his/her own pain is, about what is missing, about what a dream is and what a life is at the same time, about his/her world, telling some of his/her deep sincere stories. Through Kharms, I tried to talk about a disintegrated and absurd society that we live in, a petty-minded mentality, a denial of freedom, political and state repression, and slight. This play is my deep and personal cry, our common cry…

Angelcho Ilievski, a young Macedonian director, graduated in theatre directing from the Faculty of Dramatic Arts in Skopje, Republic of Macedonia, in the class of Professor Slobodan Unkovski and associate professor Zlatko Slavenski. The main theatre he works in as a director is the National Theatre in Bitola.

The previous theatre productions: “The Sower of Children” (his own text), “The Lesson” by Eugene Ionesco, “The Seducer” (his own text), “Steps” by Samuel Beckett, “The Ghost Sonata” by August Strindberg, “The Censor” by Anthony Neilson, “Family Stories” by Biljana Srbljanović, (all plays were performed in Macedonia), and “Motherfu..er, who started it first” by Dejan Dukovski in Osijek Croatia. He was assistant director in the play “Lost Germans” by Dejan Dukovski directed by Slobodan Unkovski and “The Master and Margarita” by Mikhail Bulgakov directed by Ivan Popovski. He is the author of three dramatic texts: “The Sower of Children”, “The Seducer” and “Where Is Your Place Joey” (drama for children), as well as two poetry books “On the Way to the Sun” and “Memories”.

Mila Mašović was born in Niš in 1983. She writes plays for children and adults. She graduated from the Belgrade Faculty of Dramatic Arts, Department of Dramaturgy in 2010, and from the Faculty of Philology, Department of General Literature and Theory of Literature in 2007. At the Institute of Theater, Television, Media and Film in Belgrade, she was engaged in scientific work in the field of the theory of dramatic arts, media and culture as a PhD student and holder of scholarship granted by the Ministry of Education and Science of the Republic of Serbia.

She won numerous literary awards: “Branko”, “Selenić” and “Kulundžić” Awards for the original script for children at the festival “Zvezdarište” in Belgrade, as well as the children’s jury award in Kotor in 2008. She wrote numerous dramatizations for radio and theater. She is the author of a number of original radio plays, the most important being: “Faster Than a Bullet – the First Serbian Marathon Runner”, Radio Belgrade: 2009; “One-Female Drama”, Radio Belgrade: 2010. Premieres of plays for children: “Wild Worm”, Little Theatre “Snail”, Belgrade, 2008; “Gulliver on a Trip”, Puppet Theater “Pinocchio”, Zemun, 2009; “Stone Flower”, Small Theater “Duško Radović”, Belgrade, 2015. The premieres of drama texts for the evening scene: “Hormones”, City Theater “KIC – Budo Tomović”, Podgorica, 2014.

She lives and works in Belgrade.

This script, originally titled “Citizen Kharms”, is a kind of documentary fiction about a Russian avant-garde writer Daniil Kharms. Unlike the famous 80s film, this play is a combination of fiction and facts. I wrote the text on the basis of different material, historical material, Kharms’s diary, notebooks, police files, testimonies of those who knew him, but also on the basis of his literature – short stories, drama and songs.

What was interesting for me was to show through this drama how and to what extent totalitarianism developed in a bureaucratic country as was the Soviet Russia. The absurdity of Kharms’s suffering in life should be a warning to all of us. It particularly affected me that it was the literature he wrote for children that made him become a “police case”. The story of Kharms is a story of injustice and persecution that happens to artists, and in that sense it is universal and worth to be told. 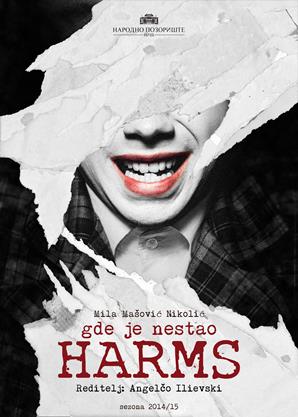