The Miracle of Saint George

He graduated and obtained a master’s degree in dramaturgy at the Faculty of Dramatic Arts in Belgrade.

He worked as a playwright and editor of the MTV Drama Program, and is now a professor of film and TV screenwriting at the FDA in Skopje.

He is the author of about twenty theater plays and film and TV scripts and the winner of numerous awards at Macedonian and international festivals.

He studied directing and dramaturgy and obtained his masters’ degree at the Academy in Prague (DAMU), Department of Directing in Alternative and Puppet Theater, in 2003.

In addition to working in institutions, he is engaged in the experimental use of light with the art group Radio Nica, which he founded.

He has directed in many theaters in Serbia and abroad (Croatia, Slovenia, Bosnia and Herzegovina, the Czech Republic, the Netherlands, Germany, Sweden, Russia) and has received numerous awards for his work at domestic and foreign festivals. He works as a theater and TV director, screenwriter, playwright and lighting designer.

So far in his career he has won over 30 awards (for directing, best play, audience awards, lighting design, stage space, visual identity, etc.)

As a theater director and writer, he is permanently interested in the development of children’s theater, as well as youth theater.

He nurtures great respect and love toward puppet theater.

A WORD FROM THE DIRECTOR
The Miracle of Saint George is a fantastic tragicomedy by Macedonian writer Rusomir Bogdanovski, which in a witty, absurd and fun way deals with themes common for all peoples of the Balkans: constant wars, brutal assassinations of rulers, abuse of religion and change of religion.

This grotesque play takes place in an unnamed kingdom (perhaps somewhere in the Balkans), where an eternal struggle for power is being waged, and the people are being held in complete obedience through abuse and manipulation of faith. But what happens when the angels, led by the archangel Michael, offer the ruler to renounce the old pagan beliefs and accept a new religion (which is unusually reminiscent of the Christian one). Can an entire kingdom change faith overnight? What is the price of such a change?

Three Balkan nations: Bulgarians, Romanians and Serbs will present themselves through their artists in this unique theatrical experience full of rhythm, humor
and love. Yes, love, which still remains hovering over all characters and situations as the
only remaining weapon of good in the fight against stupidity, darkness and evil. 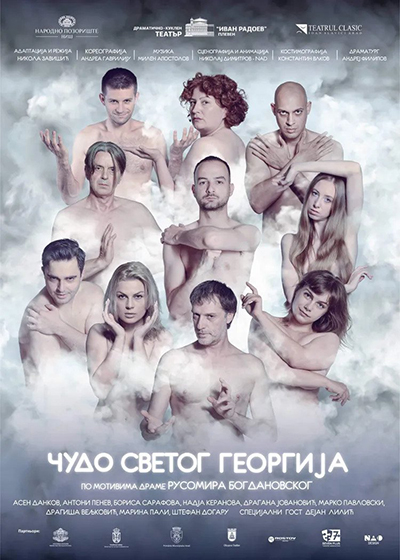