The premiere performance of the play “The Decased” in Belgrade

The premiere performance of the play The Deceased by Branislav Nušić,  directed by Željko Đukić, is going to be held at the Main stage of The National Theater in Belgrade on Sunday, 12 June at 7.30 p.m..

The Deceased is one of Nušić’s most significant satirical comedies, wherein an epic connection between the money and the power held by the government is exposed. We are presented with a realistic picture of the origins of significant money investments, spiking career speed-ups and questionable values ​​of some PhD degrees. By means of a tragic capitulation of a robbed intellectual person, the harsh truth is being told about many authorities, both of the then society, and of the present one, stemming from robbery, deception, the take-over right and perjury. 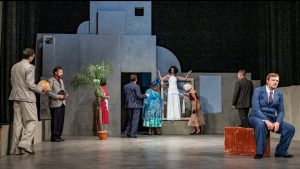