The Premiere Performance of the “Carmen” Opera

Home News The Premiere Performance of the “Carmen” Opera

The premiere performance of the acclaimed piece by Georges Bizet, opera Carmen, is going to be held in front of the Niš audience at the National Theater in Niš on two occasions – June 14, with conductor Dejan Savić to hold the baton, and on June 17, this time with the lady conductor Dijana Cvetković. Opera Carmen, directed by Ivan Vuković, is the last premiere performance  when it comes to this theater season. We are going to have the opportunity to see different casts and vocals performing, one for each of the two opera performances.

Opera Carmen represents a joint project of The Niš Symphony Orchestra, The Faculty of Arts in Niš and the National Theater in Niš. The performancs are held under the auspices of The City of Niš.

In addition to the conductors Dejan Savić and Dijana Cvetković, and the director Ivan Vuković, the rest of the authorial team also includes an associate conductor Zoran Andrić, the concert masters Sanja Jović and Stanislava Alađozovski, the accompanists Mina Krasić and Anita Zdravković, as well as the choir conductor Ivana Mirović. The costume designer is Dejan Gocić, the set designer is Katarina Pavlović, the choreographer is Ana Kazimić, while Marko Pavlovski is in charge of the stage movement.

The cast and vocals of the opera are the following artists:

There will be one more opera performance in the open on the Summer Stage in the Niš Fortress, on June 27.

Bizet’s most famous work is certainly the opera Carmen, written in 1875, based on the namesake play by Prosper Mérimée. This opera’s premiere performance was a complete failure. Unaccustomed to such a plot and unusual orchestration, the audience had initially been bored, and later on even protested by whistling and being loud. The catastrophe got enhanced by bad reviews in the followng day press releases. Nevertheless, the opera received praise by true music connoisseurs – Debussy, Saint-Saëns, Tchaikovsky and Brahms, who attended the opera performance twenty times and claimed it was the greatest opera ever written.

As time went on, Carmen indeed achieved unprecedented success and became the most famous opera ever, nonetheless, without Bizet witnessing it. The effort he put into the production and preparation of the opera, as well as the enormous disappointment over its premiere performance failure, were too big a misfortune for him to handle. He died of a heart attack at the age of 36, on June 3, 1875, just a few months after the tragic premiere performance. 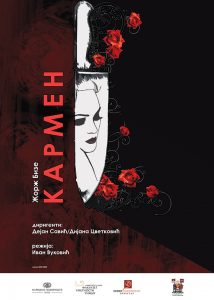