The official theater season 2021/2022 reached the finale with last night’s performance of the opera Carmen, held on the Summer Stage in the Niš Fortress. Nevertheless, for the artists who perform in the musical Some Like It Hot this is not the beginning of the summer break, since they are scheduled with guest performances in Bulgaria and Montenegro in the month of July. These are going to be be the first of a kind guest performances of the musical that has never ceased to delight the Niš audience, and additional tickets thereof keep being sought after.
The numerous-member ensemble is first going to take part in the second Sofia Festival of Musicals, performing on the stage of the Muzikalen Theater on July 1, and then at the Barski Ljetopis Festival in Bar on July 17.
The musical is based on the namesake movie and was directed by Aleksandar Marinković, performing the main male role – Joe, while Dragana Mićalović is performing the main female role -Sugar Cane.
The reunion of the audience and the actors in the National Theater  in Niš is scheduled for the month of September, on the occasion of the 3rd Festival of Drama and Theater of the Balkan Cultural Space Theater at the Crossroads. 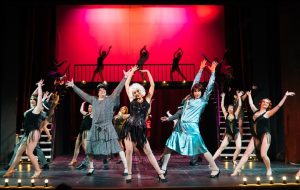