In cooperation of the National Theater in Nis, Krusevac Theater and the International Nisville Jazz Theater Festival, the play “As You Like It” was produced, whose premiere performance will be on August 2, 2019 at “Nisville”.
This romantic, pastoral comedy created around year 1600 follows the fate of two infatuated young people, who were expelled from their homes – Orlando was sent away by his evil older brother, and Rosalinda by her uncle, who had taken over her father’s court. Unaware one of the other, with their entourage, they both seek refuge in the Ardennes Forest, where Rosalinda’s banished father is already found. The girl is disguised as a young Ganymede, which will lead to new comedic trades. In the end, it all ends with a general reconciliation and the wedding of four couples.
Through the story about the conflict of the estranged brothers, Shakespeare promotes human values such as brotherly love, tolerance and togetherness, where every problem is overcome and the negative characters are transformed into good ones by the most magnificent of all spells – sincere love.

The word of the director

“ALL WORLD’S A STAGE, AND ALL THE MEN AND WOMEN MERELY PLAYERS; THEY HVE THEIR EXITS AND THEIR ENTRANCES; AND ONE MAN IN HIS TIME PLAYS MANY PARTS. ”

Nikita Milivojevic is one of Serbia’s leading theater directors.
“With the engagement of his plays, he marked the nineties at the Serbian Theater, and with a bold and new reading of the classics, he brought it into the new century.”
He has received all the relevant theater awards for directing in his country, (Bojan Stupica awards, several Steria awards, Bitef’s, critics’ awards for Scene magazine, annual awards: National Theater in Belgrade, Yugoslav Drama Theatre – Budva City Theater, Dusko Radovic Theater, Sabac Theater ”Ljubisa Jovanovic”, SNP / Novi Sad, and many others at Festivals all over Serbia: Kragujevac, Jagodina, Vrsac, Sabac, Zemun, Novi Sad, Mladenovac…
In a joint survey of theater critics, the play ‘Banovic Strahinja’, directed by Nikita Milivojevic, was proclaimed the most significant performance in the 90’s in Serbian theater.
Based on the book ” New York – Belgrade ” by D. Miklje, wrote the script and directed the feature film ‘Jelena, Katarina, Marija’. (N.York 2008-2009) *
In parallel since 1997, he has been pursuing a career in Greece. The play Crime and Punishment at the Amore Theater was proclaimed the cultural event of the year in Athens, for the Three Sisters (Katja Dandulaki Theater) he received the Best Director Award.
He has directed for the Athens Summer Festival: in Delphi and Epidaurus.
In addition to Greece, he has directed in: Sweden, Slovenia, Macedonia, Turkey, Germany, Italy, Cyprus, United Kingdom, USA…
(Calderon, Shakespeare, Aeschylus, Sophocles, Aristophanes, Chekhov, Bulgakov, Pinter, T. Man, Brecht, H. Muller, Ruzevich, Vitrak, Jonesko, Bond, Beckett, Stopard, Meterlink, Sartr, Strindberg, Ibsen, Bergman, Wilder , A. Miller, Dostoevsky, Crnjanski, Andric).
1996-2004 Full Professor at the Department of Acting / Directing, Academy of Arts, Belgrade
2005-2009. Director of the Belgrade International Theater Festival (BITEF) and the Bitef Theater.
2009. Full Professor at the Department of Acting / Directing, Academy of Arts, Novi Sad.
2014. Founder and director of the Shakespeare Festival in Serbia.
He lives and works in Belgrade and Athens.
Literature: Volk Petar, Illusions at the Flower Square, Museum of Theater Art in Serbia, Belgrade 1997, page 370; 45. Sterijino Pozorje, Sterijino Pozorje, Novi Sad 2000;

Sum of Shakespeare’s works preserved to date consist of 38 theatrical pieces, 154 sonnets, two long narratives and several other poems. His theater pieces have been translated into all living languages ​​and are shown in the world more frequently than any other.

Between 1585 and 1592 he began a successful career in London as an actor, writer and co-owner of the theater group  “The People of Lord Chamberlain”, later known as the “King’s Men”. In 1599, several actors from the troupe founded their own theater on the south bank of the Thames and called it the Globe.

Shakespeare wrote most of his works between 1590 and 1613. His early works are mostly comedies and histories, the genus he raised to perfection by the end of the 16th century. He then wrote tragedies until about 1608. During this period, Hamlet, King Lear, and Magbeth were created, plays that are enlisted in the world’s best theater pieces. In his late period, he wrote tragicomedies and collaborated with other playwrights.

Shakespeare was a well-respected poet and playwright during his lifetime, but his reputation did not reach todays scale before the 19th century. The Romantics particularly emphasized Shakespeare’s ingenuity, and the Victorians celebrated him almost as an idol. Since the 20th century, Shakespeare’s ever timely and always actual works have been constantly performed in various cultural and political contexts around the world.

All Shakespeare’s works have been translated into Serbian language. 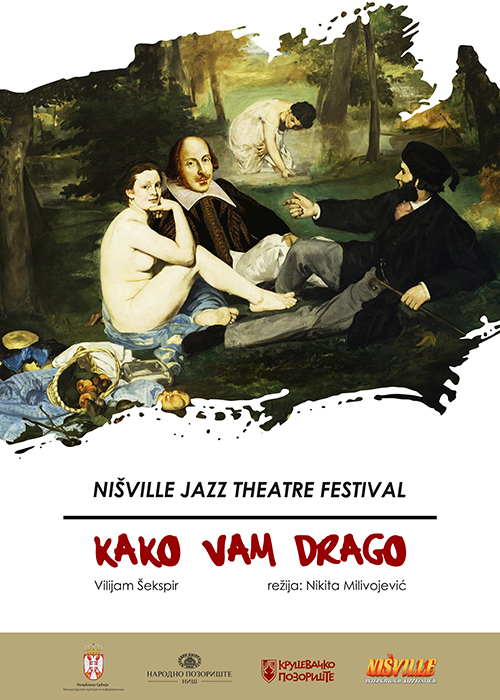