The Street of Lonely Cars

The Street of Lonely Cars is an absurd play about the meaning of human existence in a dehumanized society where the main means of control and the only trigger is fear.

Closed and confined, reconciled with their own powerlessness, people who live on that street have long lost all hope and have essentially ceased to live. However, an unexpected visit and an open hole in the wall trigger a series of events…

A NOTE FROM THE AUTHOR

It is about a closed world. The borders are set up and there seems to be no choice: decay, angst, poverty, repetition, boredom, loneliness … A stranger falls into this world out of the blue and uses bureaucratic measures to attempt and impose order and win power. The balance has been disturbed, and the citizens wake up from lethargy, struggle to preserve what they thought they possess: peace and eternity. This is a mystical and urban story of fear, misunderstanding, emptiness, loss, and absurdity. Electronic Silence buzzes in our ears; vroom of black limousines is heard. Love is always somewhere else. So, it is about us.

I accepted to work on the play The Street of Lonely Cars considering it a challenge to convey on the stage the absurd and grotesque feeling of our reality, of our almost destroyed society and people who have not had a road sign for life for a long time now. Black limos cause fear and the fear has systematically been maintained and spread to every citizen. The fear takes a place of honor in the political life of our community. There are fewer and fewer citizens every day, but the fear is getting bigger. At one point, a character in the play asks a question that echoes along the empty streets: what should a man do?

He is a writer and editor of Gradina, literary arts and culture magazine. He is a member of the Serbian Literary Society. He has published eight books of poems, four books of prose and two plays. Three of his books have been translated into Greek, Bulgarian and Macedonian. His poems have been translated into Bulgarian, Romanian, Hungarian, Macedonian, Polish, Spanish and Greek. He has received a number of awards and recognition. He won Sterija Award for original local drama text for the play Street of Lonely Cars (2017). The novel Street of Lonely Cars was published in the edition of the National Library Stevan Sremac in Niš.

Đurđa Tešić was born in Belgrade in 1977. She graduated in Theater and Radio Directing from the Faculty of Dramatic Arts in Belgrade in 2002 in the class of Professors Nikola Jevtić and Alisa Stojanović.

She has directed the following productions:

Straightened by iron by G. Balančević (National Theatre in Belgrade, 2013

All aboard the Marriage Hearse by M. Morillo (Jazavac City Theatre, 2015)

The Misanthrope by J. B. P. Moliere (National Theater in Subotica, 2017)

My Grandfather is Out by D. Janković (Belgrade Drama Theater, 2017) 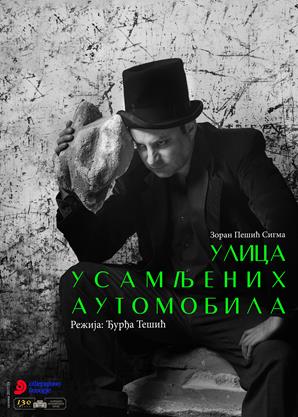