In Ephesus, in 356 BC, the Temple of Artemis was burnt down. Herostratus, a Greek merchant, set fire to one of the world’s seven wonders in his quest for fame and immortality through centuries. Instead of being punished and forgotten, the criminal begins his social ascent.

So begins the story of the eternal struggle of good and evil, suitable for all time and all spaces. It is the story of manipulation using money, power and authority that has devastated the entire humanity for centuries. The story of the struggle of the righteous one who cannot remain indifferent when evil, cynicism and hypocrisy grow and threaten to catch everything around.

Grigori Gorin (Григориј Израиљевич Офштејн, 1940–2000, Moscow) was a Russian writer of Jewish descent. He was involved in writing from his student years, when he published under the pen name Galka Galkina. He wrote around thirty plays, screenplays and collections of aphorisms. The aphorisms from the period of perestroika and the collapse of the Soviet Union are of special importance.
The play „Forget Herostratus!“ was published in 1972, but is still current today. This is Gorin’s first theatre play adapted in our country.

I was born on Epiphany at the beginning of the second half of the previous century in a country in the hilly Balkans. It was with the will of gods that the country collapsed into several smaller ones, which were by structure and government important and strong entities, and which continued to exist in their heavenly prosperity.
I was educated in several countries; I lived with several beautiful and smart women who gave birth to my three sons. I have a problem with the youngest. He likes theatre…
In order for them to live happily, I leave them nothing. It is all I have got…
I have been awarded for my work.
I am loved and appreciated for my work.
I am neither loved nor appreciated for my work.
I think and say what I want. I do not belong to anyone. I am alone; I study and ask the smarter one for advice …
I am decent and well-mannered and someone mistakenly have said that I am a nice man.
I like everything that young people like.
LOOK BACK! HERE COMES HEROSTRATUS! 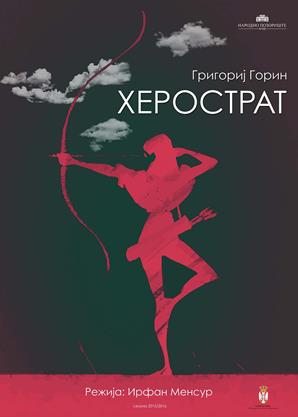