A Word From the Author / Director

“In some parallel universe,
Thousands of light years from our world,
Perhaps the events could unfold exactly as described here. ”

Theater is not a time machine. This piece is not intended to write new history. The events are fictional, fates and relationships of the real historical characters changed; The French Revolution was used as the paradigm of every upheaval.
In our play “1789”, the people with their suffering and aspirations always remain in the background. Above all, we deal with the leaders, because without their decisions, such a bloody and merciless revolution, as was the French, would not have happened. Leaders are the ones who make mistakes in evaluating, citing, manipulating, indoctrinating, or choosing to use violence when they see fit. What dark motives are hidden behind all those persons who, at some historical moment, dare to put themselves in charge of their peoples? What desires, hopes, complexes or fears do they have? Do they ever even know what they are doing? If they had known about the outcome of the revolution they were starting, would they have tried to stop it?
Our play speaks about the powerful who, blind to the evident evidence that the whole society will suffer in bloody chaos, are unable to prevent tragedy. Blinded by their own ambitions, dreams and desires, they plunge the whole community, and themselves, into the abyss. Some are driven by ideology, others by patriotism, a third by revenge or even obsessive love, but all share the same fate – a violent death they could not have foreseen.

Born in Nis in 1962 to mother, Mima Kuric, headliner of the National Theater and father Mensur Kuric, a dental technician. He is the brother of Irfan Mensur, a fine actor and director, the husband of Anna Kardelis Kuric, a splended actress and the proud father of two wonderful young people Vigor and Stribor. He has great friends on many sides of the world. Some of them still live in Nis, very close to Hadi’s heart. It is the most important part of the resume. And now the little things. He graduated directing in Belgrade in 1985. He worked as a director at the National Theater in Sarajevo from 1988 to 1992 when, for obvious reasons, he left Yugoslavia and went to live in Spain, where, together with his wife and mother, he founded the “Teatro de la Resistencia“, a theater company he has headed to this day. He stared in dozens of lead roles, directed some fifty performances in Yugoslavia, Spain, Mexico, and Colombia. He has written thirteen original plays and dozens of adaptations. He has published four books of dramas and many articles in specialized theater magazines. He is a member of the Spanish Academy of Performing Arts and has won several awards for acting, directing and plays. In his rough estimate, at least one million viewers saw his work.

Katarina Filipovic was born in 1989 in Nis. She graduated textile and clothing design from the International University of Novi Pazar, Nis locatation – Department of Applied Arts, 2015. She graduated from secondary Art School “Djordje Krstic” in 2008 in Nis.
She is a participant of several significant exhibitions of clothing and design, as well as fashion shows in Serbia.
During 2018 and 2019, she worked as an Associate at the National Theater in Nis. In the play by Dusan Kovacevic “Limunacija”, directed by Nebojsa Bradic, she worked as the Assistant to costume designer to Marina Vukasovic Mednica, and on scenographic painting for the same play. In perfromance “The Duchess of Folies Bergeres” (2019), directed by Jug Radivojevic, she worked as the Assistant costume designer for Tatijana Radisic. In performance “The Government and Its Opposition” (2019), directed by Egon Savin, she worked as the Assistant production designer for Marija Kalabic, and scenographic painting for the same play. She was the Production designer in performance ” Sand Games” (2018), directed by David Alic. She was the Costume designer in performance “Ice Cream” by Miro Gavran and directed by Spasoje Z. Milovanovic (2019).
She was the Production and Costume designer in the play “Cabaret Cabaret”, directed by Spasoje Z. Milovanovic (2019), produced by the Student Cultural Center in Nis.
At the Krusevac Theater (2019), she is the Costume designer in the play “Goodbye Mr. Huffman” directed by Sasa Petronijevic.

Biljana Krstic was born in Nis.
She graduated from the Academy of Applied Arts and Design in Belgrade, Department of Stage costume in the class of prof. Pavle Vasic.
She was a Costume designer at the National Theater in Nis for 40 years. She was the director of the National Theater for two terms, from 1996 to 2003.
She worked as a professor at the Nis Art School, where she taught Costume history and Stage and Contemporary costume.
She worked in over 300 shows in the country and abroad, 2 feature films, 5 television dramas.
She desined clothing for folk ensembles and choirs from Europe to Australia, and for puppet shows.
She has worked in Poland, Bulgaria, Slovenia, Macedonia, Bosnia and Herzegovina, Montenegro ….
She has received numerous awards and recognitions, including 5 awards for best costume design at professional encounters of the Joakim Inter Fest.
She still works as a costume designer and is involved in teaching.

He was born in Nis, where he completed primary and secondary music school and graduated from the Sarajevo Academy of Music.
As a multi-instrumentalist and composer of popular music, he has performed on concert venues (auditoriums, halls, stadiums) throughout the former Yugoslavia and has been a guest on the largest radio and TV stations. He has recorded six albums for PGP-RTS and is the author of several Yugoslav hits.
He composes music for theater, animated, documentary and feature films, for which he has received numerous awards at domestic and international festivals. Milan Karadzic, Olivera Djordjevic, Dejan Krstovic, Kokan Mladenovic, Nenad Todorovic, Zoran Lozancic, Spasoje Z. Milovanovic, Aleksandra Kovacevic are some of the names he has collaborated with in this field.
He wrote the oratorio At the Crossroads that opened the 20th International Choral Ceremonies. He has published a Vergul – Art edition with compositions for chamber ensembles and has held an Author’s Evening at NIMUS. He has recorded vocal-instrumental work This is My Country with the Symphony Orchestra and the Radio Television Serbia Choir, published by the SASA Branch and the Faculty of Arts in Nis. His compositions have been performed in Spain, Bulgaria, Italy, B&H, the Republic of Srpska, Serbia …
He is a full time professor at the Faculty of Arts, University of Nis.

Born in 1975, he graduated Acting from the Faculty of Arts, University of Prishtina, in the class of Professor Bozidar Dimitrijevic. He is an Associate Professor teaching: Stage movement, Acrobatics and Stage fighting courses at the same Faculty. He attended professional development workshops of students of Marseille Marso. He authored Stage movement for over fifty professional theater productions. He played multiple theater, film and television roles. He participated in international and domestic theater projects, workshops and jury work at several festivals 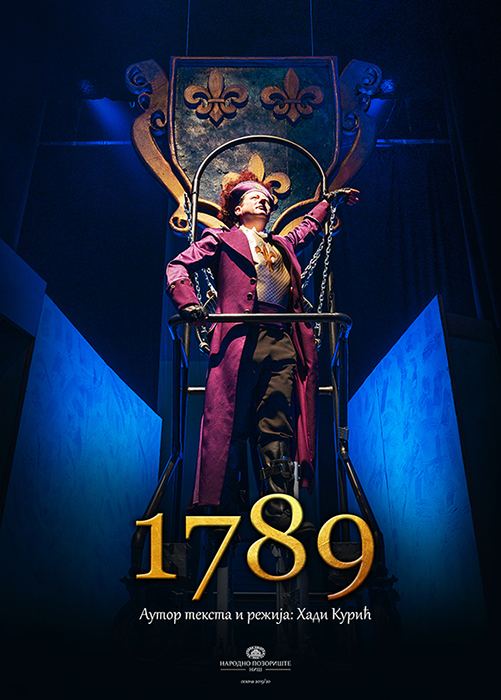