The National Theater in Nis continues the practice of presenting its employees through interviews. Our goal is to bring the behind-the-scenes employees, who make sure that the administrative, legal and logistical part of the work is done in the right way, closer to the public. This time we talked to Nelica Milosevic Stankov, the technical secretary of the theater. 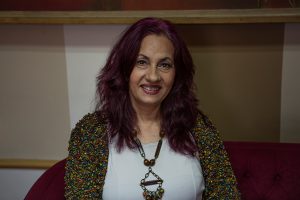 You have spent a lot of time in the National Theater, almost your entire working life. To what extent has the theater changed since the moment you started working?

I have been at the National Theater since 1984. It was also the first job posting I applied for, and it was posted in that period. Many years are behind me, for me to remember all the details that marked my past work in this house. As for the way of working, there were not many deviations, because the House Rules of the theater always determined and maintained the rules of behavior and treatment of every workplace that exists in the institution of culture. Some things have changed. Of course, there are both negative and positive changes. We all know that in that period, as far as the documentation was concerned, it was necessary to work on the machines and gestures of that time, and that greatly slowed down the holding of rehearsals and performances. However, it also had a positive side, colleagues were in closer contact because of the agreement on planning and organization of work. Therefore, there was more socializing, and interpersonal relations were really at an enviable level. With the appearance of the first computer in the theater, everything started to go faster, but the distance of people in the collective increased. In any case, the theater has always been our second home, so we all came to work very gladly and left late, because after finishing work, we always met and recounted events on a daily basis. What was the most important and did not change, is the work in the interest of quality preparation of rehearsals for the best possible performance of the premieres. It was a pleasure for each of us to have the end result be rewarded with the longest possible applause of the audience.

Was any of your colleagues with you at the very beginning, someone who helped you get used to working at the National Theater more easily?

Of course. You always remember those moments when, as a new worker, in any workplace, you considered every problem unsolvable. It happened that I also thought about a problem at night and tried to overcome it the next day on my own. But I also had help from colleagues, who gave me selfless support. I have to single out two people: Ljiljana Komlenac, who until then worked at my current job, in the current office. I took over the entire working style from her, because I thought, and which was later confirmed to be correct, that her functioning and maintaining the organization of work was very useful for my further business engagement and success. Also, great moral and business support was provided to me by my retiring colleague Stevan Popovic, who slowly introduced me to theater waters with his calmness and wise advice in every respect. I am especially grateful to him for everything and I remember him very fondly, because he is responsible for a large part of my getting used to and taking on problems. He was an exceptional man, who supported his young colleagues, so I inherited that affection for incoming younger colleagues and accepted them in the same way.

Your workplace is such that you work directly with a large number of people. Who made the biggest impression on you and why?

This is actually the most difficult question, which I was never ready to answer, nor to comment. A lot of people have passed through my working life counting thirty-five years. Among them were also world-famous greats in the field of culture. You consider your colleagues your family, so they can’t even be included in the group of people who would leave a big impression. You simply become very close and no longer look at them as colleagues. They are your family. There were wonderful people among them, educated, professional and very, very successful in their work. It would probably be incorrect to single out any of them, because even if I had to list them, it would take me a few pages and a lot of time to remember all of them, as well as their contributions to the development of the Nis Theater.

What is your greatest job satisfaction and what will make you miss working in the Theater one day?

The goal of working in this workplace, in theaters in general, is to successfully perform premiering shows. This is the moment when, after a long work, with accompanying problems, you manage to share that joy with the audience and colleagues. The biggest reward for the entire work, from the premiere to each subsequent rerun, is the applause of the audience, which should be experienced, and only then do you realize that everything you did paid off. The result is there, and you continue to work and strongly support the actors, you move your team members by conveying the message of the next play in the interest of the audience, depending on the theme of the play. I will miss hanging out after each show, as well as after work day. In those moments, each of us remembers some anecdotes, then colleagues who are no longer among us, and that time dedicated to them revives them for a moment, and brightens our evening, because we have confirmed that dear people are never forgotten, especially those who gave  great contribution to culture, and to our theater.