Georgia O’Keeffe (1887-1986) was an American artist. She was best known for her paintings of flowers, New York skyscrapers and New Mexico landscapes, as well as for painting the rocks, shells and animal bones. She was one of the first women recognized as an artist in the United States. She has been recognized as the Mother of American modernism. She was in love, and then married to a famous New York photographer and art dealer Alfred Stieglitz.

Nadežda Petrović (1873-1915) was the most important Serbian painter of the late 19th and early 20th century, the founder of Serbian modern art. She studied in Belgrade and Munich, participated in numerous exhibitions in the country and abroad, and she also engaged in humanitarian work. She was one of the founders of the Circle of Serbian Sisters, Lada (the first art association) and the First Yugoslav Art Colony in Sićevo. As a volunteer nurse on the front, she participated in the Balkan wars and the First World War. She died of typhoid fever in Valjevo in 1915.

A Note from the Author

Women Painters is the play about a woman trying to fight for what is rightfully hers by birth: the right to think, create, be herself, and be loved … The play incorporates three stories connected by that theme. The painters want to be themselves and do not want anyone to prevent them in that. They feel defeated and angry when someone says you are just a woman, a sentence that echoes in their thoughts as the loudest of all, causing anger and anguish. They are fighting against all prejudices, against all you do not have hands for this and this is a man’s job. They fight against what others will say and enjoy their victories. With the same goal, but totally different, they make sacrifices for what is important to them. Georgia O’Keeffe sacrificed family for art, while Nadežda Petrović sacrificed art to defend her country. They are in unhappy relationships with the partners who drive them crazy and make them think they might really be crazy for wanting a lot, even if what they want is what belongs to them. They are like all of us. They are forgotten, although we meet them every day. Now the time has come when all of that changes. We no longer fight in silence.

Theatre play Women Painters is a triple story about the struggle and faith in a dream. Three women, of different characters and destinies, encounter with everything they have to sacrifice, everything they have to give up in order to follow their own way. For one of them, it is a desire to please her mother, for the other, it is the need to have children, and for the third one it is international career and living abroad that she abandons to stay with her country and people in the whirlwind of the war. All those denials and sacrifices speak of indescribable power and dedication, but also of the fact that the person who is self-consistent does not have much of a choice. There is only one way, carved in the rocks of life obstacles, social stigma, and rigid gender roles. In a better world, could these women be spared this fight? In a utopian reality, could these women have the possibility of taking both choices and not just of an either-or. Such a reality, in which women would not always have to win their right to be anything they want, is what civilization should strive for. But, this struggle is what sharpened the characters of women painters and made their struggle and determination shine like a diamond and cast light away. This play speaks about the struggle to be consistent with oneself, about the conquest of the rights to one’s own dream. 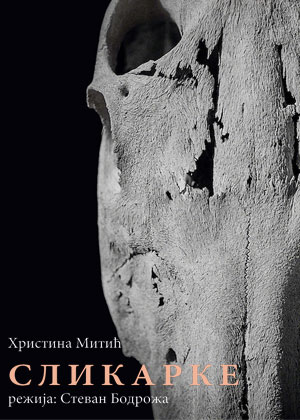