Coproduction of GRM d.o.o. Belgrade and National Theatre in Niš

Ice Cream is a comedy about life and arising from the life that every viewer, be it a man or a woman, knows. An exciting, witty and convincing play follows the destiny of a mother and a daughter– from the day of daughter’s departure to kindergarten and mother’s first day at work, all the way to the nursing home. One after another, the scenes of love, women, men, family, and children change… Ice cream is a dessert with a taste of theatre that you will have to try, whether you want it or not. And, you don’t discuss tastes.

Spasoje Ž. Milovanović (Kruševac, 1971), Master of Arts in Theatre Study. As a playwright, dramaturge, director, and theatrologist he co-operates with the most important theatres, festivals and theatre journals, and editions in Serbia, in the region and Canada. He is a permanent critic of Radio Belgrade 3 and a collaborator on major theatre journals in Serbia and the region.

At the proposal of the Theatre of Alberta (Edmonton, Canada) he has been awarded the honorary title of the Ambassador of Theatre of Alberta, as well as the national recognition Golden Badge of Cultural and Educational Community of Serbia for outstanding contribution to Serbian culture.

He is the only court expert in drama art in Serbia.

Miro Gavran (Gornja Trnava, 1961) a playwright and a narrator.

The most accomplished contemporary Croatian writer. His works have been translated into more than 30 languages, and around 250 of his plays have been performed in theatres around the world.

He is the winner of over twenty literary and theatre awards in the country and abroad, including the Central European Time (1999) awarded to the best Central European writers for the entire opus. He is the only living dramatist in the world with a theatre festival devoted solely to him – Gavranfest that moved from Slovakia to Poland a few years ago.

He has published seven novels, eight YA books, he has authored the film script for the film Grandpa and Grandma are splitting up, and his most performed theatre texts are the following: Creon’s Antigone, Night of the Gods, George Washington’s Loves, Chekhov said Goodbye to Tolstoy, The Longest Day of Maria Theresa, Royalty and Rogues, Shakespeare and Elizabeth, Dr Freud’s Patient, My Wife’s Husband, Death of an Actor, Forget Hollywood, All About Women, Drivers for All Times, Hotel Babylon, How to Kill a President, Laughing Prohibited and Nora in Our Time.

He is the founder and resident writer of the Epilogue Theatre. Together with his wife, actress Mladena Gavran he founded the Theatre GAVRAN in 2002.

He lives and works in Zagreb. 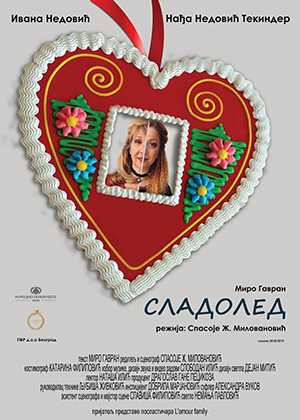