Limunation is not a story by Sremac about a teacher who comes to a secluded village with ready-made phrases of European social democracy and slogans of our nineteenth-century agitation and demagogy, but Kovačević’s devastating picture of our characters and customs that extend to the present day. Since there is a continuing decline of trust in institutions, new national tribunes aim at carrying out national aspirations into the executive power. They are there to make somebody’s day, as the suggestive hero in the Dirty Harry movie says.

Serbian academician, playwright, screenwriter and stage director. He graduated from the Department of Dramaturgy at the Academy for Theatre, Film Radio and Television in Belgrade.

He worked as a playwright in TV Belgrade until 1978. Between 1986 and 1988, he worked at the Faculty of Dramatic Arts. He has been the general manager of Zvezdara Theatre since 1998. He was elected a corresponding member of SANU (Serbian Academy of Sciences and Arts) in 2000, and a full member in 2009. He was appointed Ambassador of Serbia and Montenegro in Portugal in 2005.

He has written 21 plays and 15 scripts for film or television. He has directed both theatre plays and films. His plays have been performed in more than 150 theatres abroad. As a playwright, he is often compared to Branislav Nušić.

He graduated in theatre and radio directing from the Faculty of Theatrical Arts in Belgrade. Between 1981 and 1996 he worked as director, art director and manager of the Kruševac Theatre. In 1996/97 season he was the director of the theatre Atelje 212. Between 1997 and 1999 he was the director of the National Theatre in Belgrade. Since December 2000 he has been the art director of the Belgrade Drama Theatre. He was the Minister of Culture and Information in the Serbian Government until 2008. Today he is the Editor in Chief of the Culture and Art Program at the Serbian Broadcasting Corporation.

He has directed more than 90 theatre plays in Serbian, Bosnian, Slovenian, Croatian and Greek theatres, with a special affinity for dramatization of contemporary local literature. He has directed operas, musicals and ballets. He is the founder of the Belgrade Dance Festival. He is the author of numerous essays on theatre and a professor of acting at the Belgrade Academy of Fine Arts.

He is the winner of the most important Serbian theatre awards. He won nine Awards for Best Directing at Joakim Vujić Serbian Theatre Festival. He won Sterija Award for best modern theatre adaptation, dramatization and directing. He is the winner of the award for directing and dramatization at theatre festivals in Bosnia and Herzegovina (Brčko, Zenica, Doboj), the Award for Best Directing at Joakim Interfest and International Festival of Classics in Vršac. In Moscow, he won the Golden Knight Award for directing for the theatre play the Golden Fleece by Borislav Pekić, and in Istanbul he won the Award for Dramatization of the play Dervish and the Death by Meša Selimović.

Costume Designer, graduated from the Faculty of Applied Arts in Belgrade in 1984 and in 2001 she was awarded the MA degree in Costume Design. She has been engaged in costume design in theatre, film, television and marketing production, as well as pedagogical and research work in the history of costumes and clothing culture in the Balkans. She had four independent exhibitions and participated in several group exhibitions in the country and abroad.

She has designed costumes for fifteen feature films and cooperated with eminent Serbian directors of theatre plays and operas. She has won several ULUPUDS[1] Annual Awards, as well as costume design awards for feature films and theatre festivals in the country and abroad. She is the member of ULUPUDS with the status of a prominent artist and the winner of the Award for Lifetime Achievement of mentioned professional association, as well as Crystal Prism, the greatest award of the Academy of Motion Picture Arts and Sciences.

Full Professor at the Faculty of Arts at the University of Priština (with temporary headquarters in Kosovska Mitrovica). She graduated from the Faculty of Philosophy at the University of Belgrade, and obtained her master’s degree at the University of Arts in Belgrade, and Ph.D. degree at the University of Novi Sad. She teaches dance and choreodrama. She has danced as a soloist in Smiljana Mandukić’s Belgrade Contemporary Ballet company. She has completed her choreographic and pedagogical experience with a two-year education at the Faculty of Physical Culture in Novi Sad, Department of Contemporary – Jazz Dance (in the class of Professor Ljiljana Mišić). She has won awards in choreography. In the most important local theatres, she has been hired for stage movement, directing and choreography for many performances; she has also written author choreodramas. She has participated in local and international professional and scientific meetings. She has published professional texts in scientific journals in the country and abroad. She is the author of the book Choreodrama in Serbia in 20th and 21st Century: Gender Perspective. She is engaged in theatrical and ballet criticism. She is a member of Serbian Association of Ballet Artists.

In Erić’s oeuvre, a special place has been occupied by a comprehensive cycle of music for theatre and film. He has collaborated with some of Serbia’s most prominent theatre and filmmakers. He has won a number of prizes and awards for his creative work, most notably the October Award of the City of Belgrade, YUSTAT Grand Prix for incidental music, two Golden Mimosas for film music, two Sterija Awards for incidental music, and the Great Gold Medal of the University of Arts in Belgrade. He is a fourfold laureate of Serbia’s most prestigious award in the domain of music – the Mokranjac Award.

[1] The Applied Artists and Designers Association of Serbia 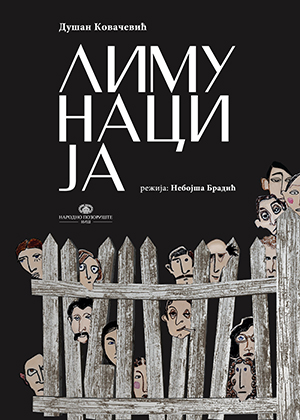