Vern Thiessen precisely describes the importance of a pause in the performance of his play in the first stage directions. When one reads such an instruction, although the reading has not yet started, one thinks of Chekhov and Becket. Through very simple but detailed dialogues (we think of Pinter), the author then introduces us to one kind of oneiric reality arising from the suffering of characters in a difficult struggle between life and death, love and passion, responsibility and consolation, identity and hidden identities. The protagonist bites the breast of his partner as if it is an apple in the first scene, although it is not an apple, and thus symbolically leaves the Eden’s Garden and continues his journey.

The author uses an almost typical melodramatic plot and deals with a love triangle whose actors are, in a slightly probable but true way, connected in a dramatic situation of the struggle with severe illness of one of them. Illness is what makes a plain soul become more refined. Death is at the door, face to face with her, and they face their own lives only to realize that it is through the other that they can learn the truth. Repetitive dialogues with silences in between, support the plot speaking louder than anything else spoken out loud.

It is in silence, repetitiveness, and rhythm that the identities blend into one another. It is in the blue of the lake, in the sky above and the landscape surrounding it and through the reality of the moment that the unreality of death is shown. The shore, where the characters from the “Apple” are, is the shore where one crosses from one world to the other. The play carries the atmosphere of a dream thick with pain, beauty, and passion. Gently and emotionally, on a thin line between dreams and reality, we have created a special atmosphere of this powerful and at the same time strange story of love and death.

Graduated from FDA in Skopje in the class of Prof. Ljubiša Georgievski in 1991.

She worked as a teaching assistant at the Department of Drama Faculty of Arts in Priština and the University of Braća Karić.

She was a BRAMS selector, a jury at Theatre Fest in Sarajevo and Alternative Theater Festival in Pančevo.

She has authored the theatre play “Perpetuum Mobile”, and published in the literary magazine “Charter”.

For one term, she was the Manager of Kraljevo Theater, and later the Art Director of the same theatre.

She has been the Manager of the Evening Scene of Kraljevo Theater from 1998 to date.

Prof. Ljiljana Petrović, a costume designer and full professor of scenic costume at the Faculty of Applied Arts in Belgrade.

She has designed costumes for a number of feature films: „Father“, „Circles“, „The Forger“, „My Beautiful Country“, „The Tour“, „The Trap“, „Absolute 100“, „ The Small World“, „Lightnings“, „When I Grow up I’ll Become a Kangaroo“ etc. and for more than 150 theatre plays and almost all leading theatres in Belgrade and National Theatres in Serbia, for TV drama, short and animated films, as well. Also, she has designed costumes for more than 350 projects realized in advertising (commercials, music videos).

The project „The Last Supper“ is in the collections of Lapidarium Museum (CRO), design „The Mask“ is a part of the New Drama Center collection in Bloomington (U.S.A.), and costume design „Cargo“ has been purchased by the Ministry of Culture Serbia.

She is a curator for the selection of Serbia for the international exhibition Innovative Costume: The Next Generation A. A. Bakhrushin State Central Theatre Museum, Moscow, Russia 2019.

Born in Winnipeg where he graduated from the Academy of Arts. He later received his Master’s degree at the University of Alberta, where he held a drama course. He was a president of the Playwrights Guild of Canada and the Writers’ Association of Alberta.

Thiessen is the recipient of numerous awards, including the Governor General’s Award for English-language drama (Einstein’s Gift), the Carol Bolt Award for Best Play (Vimy) and the Sterling Award for Outstanding New Play (Apple). He has also received the City of Edmonton Arts Achievement Award and the University of Alberta Award.

Thiessen’s work has been translated into several languages including German, French, Polish and Hebrew. His plays are performed regularly in Canada, the United States, the U.K. and Europe, as well as in Australia and Asia. He has served as playwright in residence at the Citadel Theatre and Workshop West Theatre in Edmonton. He is currently an associate artist at Epic Theatre Ensemble from New York, and several theatre companies from Toronto and Vancouver.

From 2007 until 2014, he lived in New York City. He returned to Edmonton to serve as the Artistic Director of Workshop West Theatre in 2014.

Most important plays: „The Courier“, „The Resurrection of John Frum“, „Apple“, „Einstein’s Gift“, „Shakespeare’s Will“, „Back to Berlin“, „Vimy“, „Bird Brain“, „Rich“,
„Lenin’s Embalmers“, „The Last Tree of Rapa Nui“, „Do not Disturb”, „Of Human Bondage“ (based on the novel by William Somerset Maugham).

I am very excited that Apple will be making its premiere in Nis. This will be the first time one of my plays has been produced in Serbia. I am only sad that I will not be able to attend the first performances. I had the great opportunity to visit Serbia last year, when a play I was producing was performed at the Festival of Monodrama and Mime in Belgrade. I was astonished by the warmth of the Serbian people, and was welcomed kindly wherever I went. The long history and excellent quality of Serbian theatre is impressive. It is wonderful to know that there are still countries in the world that celebrate theatre and its importance in their lives. Many thanks to the cast and crew of Apple, and a special thanks to Spasoje Ž. Milovanović, for his outstanding artistry, and to Barbara Tolevska for introducing me to your country. I hope to be back in Serbia soon. 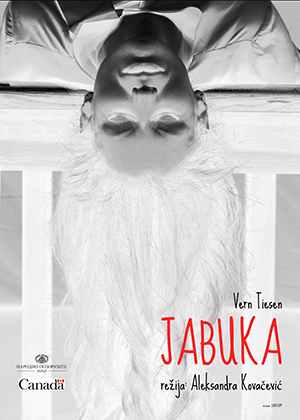