The function of the theatre is to make things impossible.

At the time of the achieved dystopia, every artistic act has the initiatory dimension to enlighten the man. And the theatre! It has always been alive and the encounter of a man with a man. Even when it was at its worst and most banal, it has always been an encounter.

34 years have passed since the world premiere of the play The Travelling Troupe Šopalović at Yugoslav Drama Theatre in 1985, directed by Dejan Mijač, my professor. Those years registered new wars, black flags, crimes, the breakup of SFRY, demonstrations, protests of artists. One question has often been raised. When is the time for the theatre, and when it is not? Is there a time when it is ethical for a theatre to renounce itself and what does this renunciation mean, who is it good for?

The Travelling Troupe Šopalović by Ljubomir Simović, with the theatre as the protagonist, is the most beautiful play for me. The play is charged with the poetry of essence, which poses questions about metaphysical, ontological, gnoseological, ethical and aesthetic nature. All of these questions relate to the being of theatre art, relations between the theatre and the life and the phenomenon of acting. The play has the strength and beauty of initiation. The world of Simović’s metaphors is subversive in today’s world of noise, anger, paroles, impoverished language, thinking and speaking.

I have looked for the stage form for Simović’s poetic and philosophical ocean of beauty, humour, and tragic, without reducing the drama. I added the songs: the Occupation of Užice, European Night in Užice, Standing in the Line in front of a Kettle of the Public Kitchen at the Customs, the Gallows at Grain Market in Užice. I created verses from some of the replicas, spinning the metatheatre dimension of the stage story, under the spread wings of the steel eagle, the claws clutching swastika and the full moon, and the wings spread over the stage.

All the world’s a stage. We play roles on that World stage. We play the roles we are aware of. We also play those we are not aware of, guided by the internal script that Eric Bern writes about in his already famous book Games People Play. We live in a time of new forms of totalitarianism and non-freedom. At such a time, the question is not whether to perform plays or not or what to play and how to play. I was interested in the relationship between beauty and evil, how evil is born, what is the power of beauty, the relation of beauty and freedom, whether there is a border between theatre and life. What happens when, under the shadow of gallows and black flags in occupied Užice, a bloody theatre of life collides with the world of four actors in the travelling troupe?

In the play by Simović, just like in those by Dostoevsky, Beauty saves the World, and has the power to transform, lead to self-awareness, and leads the villain to repentance. Actor Filip Trnavac says: I cannot enter the reality and participate in it alone! I can enter it only with all of my art that I belong to! Such attitude resolves the life–art dichotomy. The artist suffers, but saves the life, he changes the course of events, changes everything when he raises the sword of art high, of the art he belongs to with all of his soul, to the full. This attitude that the being is indivisible, and that the act of art and the act of life merge and make one, is the deed of poetry that the world recognizes as madness because it eludes reason.

Actors in the Travelling Troupe Šopalović: 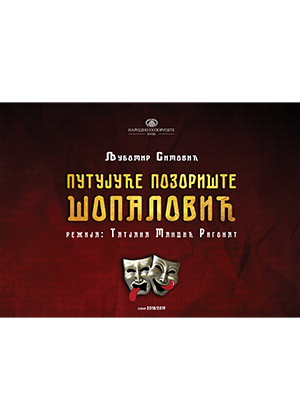