The Liberation of Skopje

He graduated from the University of Ljubljana, Slovenia first in English and French languages at the Faculty of Philosophy, and thereafter in Theater directing at the Academy for Theater, Radio, Film and Television.

He taught directing at the Academy for Theater, Radio, Film and Television of the University of Ljubljana from 1989 till the end of his professional career, and from 2005 to 2008 he was also the President of the Prešern Foundation.

He received numerous awards for dramatic text and direction, including 10 the Borštnik Awards, 6 the Sterija Awards, the Bojan Stupica Awards, the Gavelina Awards and many others. He directed more than 100 theater plays.

He is the author of numerous plays, among which the following ones stand out: The Show Will Not Be Held, The Liberation of Skopje, The Balkan Trilogy, The Wall, The Lake and The Karamazovs.

In the National Theater in Niš, he directed the very successful Lady Minister back in 2009. The play was on the repertoire for a total of 12 years.

Dušan Jovanović about the play

This three-act play includes fragments of the memories of the end of the Second World War from the perspective of a six-year-old male child at the time.

Despite the fact that the writer of this text personally knows the “hero” of this story and his relatives very well, for understandable reasons, he cannot guarantee the authenticity of the “hero’s” testimony without reservation. And yet, although the confession of – at the time six-year-old Zoran – cannot actually be considered inviolable, uncontroversial, self-contained, subjective reflection of a bygone era, let alone an authentic historical document, his – in many ways – atypical destiny awakened in us vigorous curiosity. It got us thinking. While we were writing down parts of his memories without any additions or embellishments, we were wondering what a six-year-old boy could actually see, hear, understand and experience in years 1944 and 1945.  In other words: what cognition and what kind of experience is hidden, if any, behind these seemingly simple-minded and uncomplicated pieces of observation and events, torn from the sea of ​​oblivion?

Convinced that this question is worthy of the viewer’s attention, we placed the written fragments of memories in a probable chronological order, which we now – conditionally speaking – in epic dramatic form give the audience to ponder upon.

He graduated in Theater directing at the Faculty of Dramatic Arts in Belgrade, in the class of professors Dejan Mijač and Egon Savin.

Since November 1989, he has directed about sixty plays in the most of Belgrade theaters, as well as in Skopje, Sarajevo, Podgorica, Sombor, Gračanica. The plays are mostly based on the works of Shakespeare (Hamlet, Timon of Athens, Richard III), Molière (Don Juan, The Misanthrope), Wedekind (The Spring Awakening, Lulu), Sterija (The Patriots, The Scammer and the Parascammer) and Nušić (The Lady Minister, The MP), as well as Andrić, Crnjanski (The Miss, The Mask), Fassbinder, Biljana Srbljanović, Ivana M. Lalić, Toller, Tabori, Razumovska, LaBute, Kushner, Lebović, Jelica Zupanc, Jelena Kajgo, etc. The Set designer for the most of his own plays, but also for the plays by other directors.

Award-winning for directing, set design and complete plays both in the country and the region (The Golden Laurel Wreath and The “Jurislav Korenić” Award at the MESS Festival in 1990; The Sterija Award for the play and directing at The SP Festival in 2020; The “St. Clement of Ohrid” at The Ohrid Summer in 2004; two awards at The Theater Fest in Banja Luka; best play an directing at The BiH Drama Festival in Zenica; best play and directing at The Vojvodina Meetings, Zrenjanin in 2001; The Joakim Award – the best set design for the play The Miracle in Shargan, performed by The National Theatre in Užice, directed by Iva Miloševic at The Joakim-fest in 2013; The Nušić Award for the best play in Smederevo, 2018; the best play at the Kotor Children’s Festival, etc.).

He directed four feature television series (The Foxes, It Resembles Love, A Debt to the Sea 2, The Secret of the Vine 2 – co-directing). He directed several plays for the Radio Belgrade Drama Program (The Vitomir Bogić Award in 2021).

He published two books (The Apocalypse, 2007 and The Passive Offside, 2013). Since1983 until present he has written about rock and roll, film, theater, society, politics, pubs and football for Zagreb, Sarajevo and Belgrade newspapers, portals and magazines, most often as a columnist (Oslobodjenje, Naši dani, Oko, Odjek, Ludus, Naša borba, Vreme, Blic, Playboy, Elle, Nova).

The creative director and the director of ten performances by ex-Yugoslav Republics at the Eurovision Song Contest (Serbia, Montenegro, BH, Slovenia), including the winning performance of Serbia in Helsinki.

A word from the director

The Liberation of Skopje is a play about growing up.

Is it possible to grow up without the initiation by violence, without early cognition of The Evil?

Is it necessary to face the dark side of human nature, as early as in childhood, in order for one to comprehend the surrounding world?

What exactly is freedom?

As we are growing up, is the world shrinking or are we becoming bigger?

What is the meaning of our existence? Love? And if not? What if there is no love? What if we do not recognize it?

Are we really the children of our parents, or of our great-grandparents? Is every other generation in our country always on the sacrificial altar of the creation of the New?

Is the world moving forward, backward, or in all directions at once?

Can one human life be deprived of the experience of war?

If I had at least one answer, I would not work on this play. If the answers I think I have would not be questioned again by direct, indirect, lived or dreamt experience, I would not be dealing with theater.

I owe this play to Dušan Jovanović, for the sake of that weekend at Črni vrh, those nights in the SNT Drama, those days in Belgrade and Vienna, that last meeting in Ljubljana, those exchanged letters, those laughs, climbing the cliffs, dinner at Mette, conversations about everything, even the theater. I owe it to the Niš Theater for the sake of my dad’s Fruit Day forty years ago, when I was in Niš for the first time and entered the National Theater. I owe it to myself for the sake of my twelve-year-old self while at the Sarajevo MESS I watch the first performances of The Liberation – the Ljubljana one, directed by Georgijevski, and the Skopje one, directed by Unkovski.

Cher Dušan, I hope I did not let you down.

The list of songs used in The Liberation of Skopje play and the corresponding performers:

Eyot – She Is Dreaming of a Better Day

Eyot – If I could say what I want to say

Dragoljub Đuričić & The Drums Company – The Rhythm of Freedom 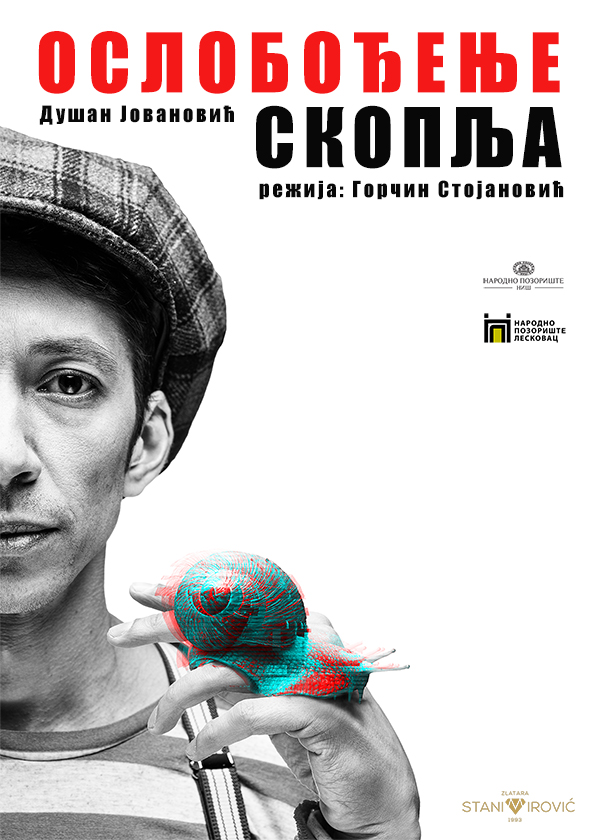