Director Dušan Jovanovich and actors from the National Theatre in Niš managed to create a theatre play not for today’s time only; but a play that will be talked about as minister’s wife by Tanka Stoic or Ljubinka Bobić. And they succeeded in doing so. In Nušić’s comedy, the director powerfully played with the new and the unseen. The production does not suffer from dull perfection, yet it is powerful, exciting, dynamic, charged with the tragicomic energy.

„Minister’s Wife“, stage interpretation by Dušan Jovanović, is a modernized and very absurd portrait of madness and thirst for power, juicy and funny critique of our mentality, and a skillfully performed series of burlesque situations. Compared to Nušić’s text, the play is refreshed with a series of new motives, enriching the conceptual level of the play, as well as its comic values. It is meant for the story, for comments, for a long and beautiful theatre life and it  will be remembered as the play that seriously, dramatically even, comprehended Živka’s pain, while at the same time did not deprive Živka’s rise and fall of hilariousness of a higher order, hilariousness arising from the comprehensive inability to change something for real and for good. 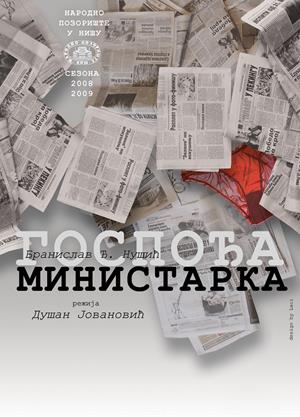