artistic manager of the Zemun Gardoš Theater in 1993-94.

Since 1996, has been employed as a playwright at the Terazije Theater in Belgrade, and since March 2013, has been managing the Theater.

The author of several plays, performed in Belgrade and other cities in Serbia: The Between, Veronese, The Battle of the Roosters, The Battle of Senjak, Bumblebee’s Flight, Jankovac – The Submerged World, The Life of Jevrem and The Return of the Duke’s Falcon.

For dramatic texts The Battle of Senjak and Jankovac – The Submerged World, he was awarded special TV Belgrade prizes at the the Association of Serbian Playwrights competitions in 1989 and 1990.

Wrote about thirty radio dramas: (To One’s Fatherland, Galactic Fever, Ring and Shoot, Milovan Glišić, The World of the Crippled, Nulla Dies Sine Experimentum, The Defence and the Fall of Bodrog, Jakl Is Returning Home…).

As a permanent associate of the TV Belgrade Cultural and Educational Program, since 1982, he has authored over five hundred screenplays within the most famous television series for children, whereas for the feature program he has written several screenplays based on his plays, as well as a screenplay for the TV movie A Small Town in the Mountains, based on the novel by Anđelija Lazarević.

The author of scripts for two sets of ten episodes of the feature series The Mansard, broadcast by the 1st Program of RTS, as well as for the series The Sign Language Primer, aimed for people with special needs.

An associate of the Borba newspaper (awarded the Borba prize for the essay in 1999), as well as of the Drama and  the Scena newspapers. From July 2008 until April 2013 he was a regular columnist for the weekly press Pečat, where he published about two hundred and twenty columns.

The following dramatic texts he authored were published in The Contemporary Serbian Drama edition: The Lake, Veronese, The Life of Jevrem, La Gerilla, Blagoljub the Second, The Return of the Duke’s Falcon, Jankovac – the Submerged World, the Battle of Senjak, Once Upon a Time in Serbia and the Conservation of Zacharias.

Awarded by the Belgrade Cultural and Educational Community the Golden Beočug prize in 2014, for a lasting contribution to the culture of the city of Belgrade culture in the drama field.

He is married and has a son.

In the eighties of the last century, under the umbrella of the then popular intellectual debates, the undersigned of this epilogue posed in the newspaper The Student a question to the author to be of the play La Gerilla: “Where Are You Heading to, Alexandar Đaja?”

Needless to say, at present I would never come up with such a trivial and curious enhanced simple question, so profound and inquisitive, to an established playwright, as proven as my colleague Aleksandar Đaja has been.

I do not claim extreme power of connoisseurship of our dramatic literature. However, I recognize Aleksandar Đaja as the one of a kind among a thousand of peers. In other words, the apostrophized playwright is the one of dignity and a writer of style.

Đaja primarily “breaks his back” in the most complex genre, the one where “without deep ploughing there are no exhilarations”, and where a person “busts his balls”. Namely, Đaja nails comedies!! At the same time, he writes in the style of the so-called direct wit, where the emanation of his spirit is spiritualized to extreme wittiness. The fact that the stages and awards or, better yet – the contempt, bypass him begs the question of the inadequacy of the value system, and not of the valorization of the author’s dramatic opus.

All in all, listen to Dolores in “The Comedy of the Revolution and Death”, in the drama La Gerilla, “which takes place at the foot of the Popocatépetl volcano in Mexico, in an indefinite year, in which characters and events are fictional, and historical facts are interpreted at will”:

It is simply incomprehensible which of them is more of a blood shedder!…The Red Cross squadrons are dropping humanitarian aid packages weighing more than a ton, turning our cities into ruins; the International Monetary Fund Divisions are shooting anyone who does not have a checking account and a Diners card; The United Nations paratroopers are descending into our spouses’ bedrooms and showering them with thousands of condoms until they suffocate; The Vatican naval infantry is expelling Mexicans from their beaches and whipping anyone who does not know the “Ave Mariaˮ by heart; the Coca-Cola armoured division is brutally smashing the Mexican demonstrations cities around by means of cola-cannons; the Samsung dumping corps is encapsulating tens of thousands of Mexicans into their TVs, torturing them by forcing them to watch Korean basketball games; the OPEC desert infantry is pouring oil on our pigs in an attempt to turn them into sheep; American death squads for the implementation of democracy are shooting at every Mexican who does not avail himself of toilet paper and every Mexican woman who does not apply a pad with “wingsˮ, while the Nobel Peace Committee nuclear submarines, are constantly firing cruise missiles on Baghdad!

Here’s an opportunity for you: Contemplate the (Đaja’s) comedy and…? And never inquire where Aleksandar Đaja is heading to. Go on, instead, and examine of what the world and its globalism have been crushing into!

To sum up, La Gerilla is a rich, uncommon comedy and not a versatile one. It is not a comedy of the absurd, though it is interwoven with absurd comicality; it is not a comedy of characters, although it rests on the traits of its characters, it is not a situational comedy, although the circumstances are what the thrill stems from… After all, you are going to read it and, God forbid, you will attend it staged and interwoven with Đaja’s rare comic nerves and comediographic neuroids.

Born in n Belgrade in 1995. Graduated in Theater and Radio Directing from the Faculty of Dramatic Arts in Belgrade, in the class of Professor Ivana Vujić and Assistant Snežana Trišić. He has directed plays for children and adults both in the country and region-wise. Engaged in composing (plays the piano, the guitar, the drums and is the leader of a Mixer Band), acting, video directing, TV and film directing (Movies The Circle and El Boemo, a documentary series Belgrade as Other Cities, a feature series A Twist of Fate).

A WORD BY THE DIRECTOR

A theatre play La Guerilla by Aleksandar Đaja is a comedy about revolution and death. The plot of the play is set in the desolate mountainous regions of Mexico or South America, although the actors of the play can be found in any part of the global village that cries out for radical change of every single thing and at all levels – for the revolution, in other words. The time frame refers to the mid last century, though it can also translate to the modern contemporaneity bursting with  challenges, when the world and the civilization as we know them are at the turning point.

The plot of the play is an absurd one: two Dorćol guys**** deliver a coffin with the deceased leader of the Mexican revolution from Belgrade to South America. They come across two female members of the revolutionary movement in Mexico and find themselves at one point in the midst of a civil war where it is incomprehensible who is shooting at whom, who is supporting democracy, who is supporting terrorism, who is an anarchy supporter, who is passionate about totalitarianism. Every person is killing and shooting for the glorification of freedom and empty phrases that have seemingly brought the modern civilization   to its end. By means of witty dialogues of the non-aligned Serbs, ready to carry out their role in the world revolution conducting each and every scam, accompanied by a carefully selected musical background, we will recognize the supranational nonsense and moral collapse of the modern world. The venue is South America, though it can also be Ukraine, Syria, Iraq, Serbia, the former Yugoslavia. Instead of the leader of a revolution who ended his life in the local tavern in Dorćol**** fleeing from the CIA, a drunken port worker arrives in Mexico placed in a coffin full of heroin aimed for “cosa nostra“ and destined for a long journey.

The South American lady revolutionaries accept the coffin, the morally pure revolution is financed by the income from the smuggled heroin cusing the innocent children impairment…and the ferris wheel keeps rotating…the revolution must continue…till the last oppressed slave.

**** Residents of Dorćol, a central and one of the oldest Belgrade neighbourhoods

One is safe as long as one exists

One is not afraid of doom.

Before dawn and before light

Be stupid or wisemen

Long live all we dead.

A dead man arrives from Dorćol

To raise our wages

For us to reach light by that corpse

And reap plenty of cash.

There is no fear of the dark either

When I think of golden grave pits

My heart being full and soul empty

On alert – what could shatch me.

Take off their rings, golden teeth

They are already dead, nothing to lose

In misery they rest

While you work, and therefore – save.

***    A central and one of the oldest Belgrade neighbourhoods

Musical pieces rearranged for the play: 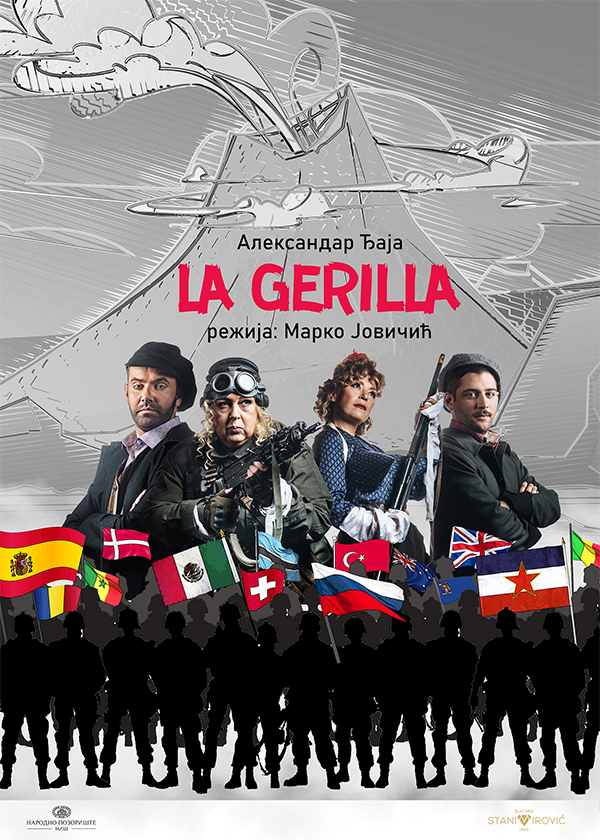