In the comedy George Dandin, Moliere deals with the theme of modern parvenus, making this piece a brilliant critique of faddism, hypocrisy, and a sick aspiration for higher circles. Namely, a rich peasant Georges Danden, trying to approach aristocracy and gain a noble title, marries a noblewoman who despises him and cheats on him. His vanity, stupidity, and greed inevitably lead him to ruin, and he, humiliated and defeated, realizes that money cannot buy what is most valuable – love.

Through a refreshing laughter in his comedies, Moliere, a refined connoisseur of all the nuances of human nature and shortcomings, confirms that he is current even today at the time when a man, in a constant race for money forgets the real human values ​​and what makes the life essentially beautiful, making a spectator wonder about himself and the world around him.

The comedy George Dandin is a serious creative challenge both for the acting ensemble and for the theater as a whole because it takes high professionalism when encountering the rules of Moliere’s Comedy.

A unique philosopher from an array of the greatest in the theater history of mankind, Moliere was in close contact with the people. Yet, through the refreshing laughter of his comedies, he makes the spectator think and wonder about himself and the world around him.

In the comedy George Dandin, Moliere deals with the theme of modern parvenus, making this piece a brilliant critique of faddism and hypocrisy. Namely, Georges Danden, a rural rich man, trying to approach aristocracy and gain a noble title, marries a noblewoman who despises and cheats on him. In a world he does not belong to, surrounded by hypocrisy, lies, blackmail, and insults, he experiences complete defeat through humiliation, moral ruin, and loss of honor, realizing that money cannot buy all, not even the title or the family, and least of all the holy community of marriage and love. Who is the master to whom, then? A man masters money or…

Is it enough to just think about it?

In memory of his teacher Asparuh Paunov,

He is an actor at the National Theater in Niš. He has been working professionally in a theatre for thirty years. During that time, he has authored and directed several successful TV shows on local TV stations and has directed several theater plays.

He is the winner of three Joakim Vujić Awards at Professional Theater Meetings.

He played in over a hundred roles in theaters in Serbia. 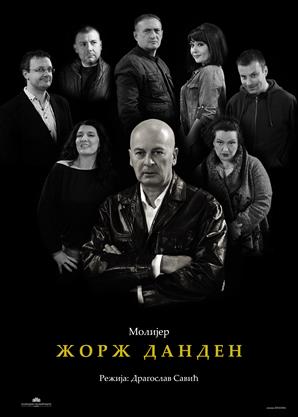