In a perfect world – a world without books – people live their perfect lives without questions, doubts, dilemmas. The main character does not realize that a single secret reading will infect him with a terrible disease – a disease of questioning and that it will be the beginning of the end of the perfect world.

Fahrenheit 451 is a story about the birth of critical consciousness, the maturing of an outcast, about a man who has the courage to make a choice. But it is also a story of loneliness and silence, about the heat that comes only from the outside, from the Sun, and about entering into the unknown, the unknown that is so beautiful and intimidating at the same time waiting for us behind the safety line, or behind the line of fire.

Fahrenheit 451 by Ray Bradbury, along with George Orwell’s 1984, Aldous Huxley’s Brave New World and We by Yevgeny Zamyatin, is one of my favorite dystopian novels. The theatre play Fahrenheit 451, inspired by this book, is also a novel. A novel and a performance. A play and a book. It is a story about the birth of a critical consciousness, the maturing of an outcast, a man who has the courage to make a choice. But Fahrenheit 451 is also a story of loneliness and silence, of the heat that comes only from the outside, from the Sun, and about entering into the unknown, the unknown that is so beautiful and intimidating at the same time and waiting for us behind the safety line, or behind the line of fire.

A NOTE FROM THE DRAMATURGE

The torrent has made it possible to download entire Shakespeare, Thomas Man, Gogol, Victor Hugo, Swift, Cervantes, Plato, Seneca, Marks, Schopenhauer, Goethe, Pushkin … Kindle, a book browsing software in electronic format, has also abandoned going to a library or a bookstore. Screen vibrations replaced the scent of paper and imprinted lead … The book got a new shape. There are still those who stubbornly refuse to zip their entire library on a hard disk. However… both of them are negligible compared to the readers of aggressive media messages, such as those in Carpenter’s film They live – Buy … Surrender … We already live in Bradbury’s dystopia in which writers and book readers are enemies of civilization that metastasized in an infinite loop of advertising, consumerism and instant pleasures … In which there is no intimacy, there is no need for creation and thinking. The ultimate pornography for the plebs would be a twenty-four-hour reading of the book before the cameras in the Big Brother’s house broadcasted today on two televisions at the same time, and as soon as tomorrow it will be grinning from all street billboards live. Reading books slowly becomes a social stigma … A sign of abnormality, a psychotic disorder, inadequacy…

Bradbury’s story is hellishly seductive as a prose reading, but it is also a nightmare for a dramaturge who is trying to make a character-driven story with a strong motivation of the two main characters, MNTG and KLRS (Montag and Clarisse) in an emerging love affair, who problematize their own existence, the issue of borders, freedom. Three-dimensional characters on a three-dimensional stage in a civilization without dimensions are like lunatics who are actually authentic people like those in Atlantis by Borislav Pekić. And the rest, the consumers of the intoxicating soma, are just empty dolls. If the spectator is wondering who this fake God is, the God who uses cables to come down onto the stage, he surely will not find a Christian God, no Jahve, no Buddha, no Muhammad… but a “wizard of Oz”, the master of a synthetic Paradise, a corporate dealer of a single emotional state, state of numbness and dullness.

The book shaped civilization just like a thumb and upright walk singled out a man compared to other primates. The book is a refuge, a sanctuary, a sanatorium, a hyperbaric chamber, a diving suit, a ski suit, a parachute, an alpine crampon … The book is the main character of this play, just as the cherry orchard (and not Lyubov Andreeva) is the hero of the Chekhov’s drama with the same name. The book is the lover who never goes away, does not make jealous scenes when there are more novels, essays, diaries, dramas… a lover who suffers comments on the margins … coffee stains… folded „page corners“… all… all but fire.

I have always imagined that Paradise will be a kind of library. 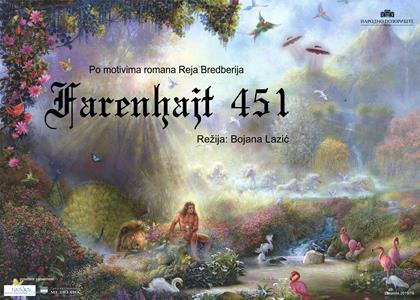