A Word from the Director:
Euripides’ tragedy evokes the events following the fall of ancient Troy, won by the Greeks thanks to a wooden horse, and the Trojan women were split among the victors as slaves. This is the story of the consequences of one unnecessary war that has destroyed one culture and inflicted irreparable losses on another.
The play “Women of Troy” is an elegy over the fate of the conquered because of needless bloodshed, pain that belongs not only to the losers but also to the victors, the accusation of inhumanity and unnaturalness of war, the condemnation of destructive urges whose victims are humanity and human reason …

Tickets for the play “Women of Troy” can be purchased at the box office of the National Theater at a price of 500 dinars, 300 dinars -with discounts. 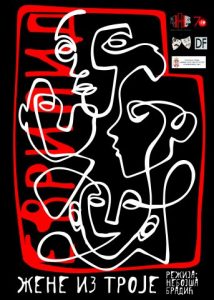