Program of the 2nd “Theatre at the Crossroads” festival

Home News Program of the 2nd “Theatre at the Crossroads” festival

The second theater festival of the Balkan cultural space “Theatre at the Crossroads” will be held from September 7 to 14, 2021 at the National Theater in Nis, as well as at two other locations in the city planned for the accompanying program – Banovina and the Officers’ Home.

The audience will have the opportunity to see performances of ten theater productions from as many as six countries – Bulgaria, Macedonia, Croatia, Romania, Slovenia and Serbia.

The day before the beginning of the Festival on September 6, the pre premiere of the show THE MIRACLE OF SAINT GEORGE, directed by Nikola Zavisic, based on the play by the same name written by Rusomir Bogdanovski, awaits us. It is a co-production of the Ivan Radoev Theatre – Pleven, Bulgaria, the National Theater in Nis – Serbia and the Ioan Slavici Classical Theater – Arad, Romania. Tickets for this show can be purchased at a price of 600 dinars, and the show starts at 7:30 pm.

After this premiere, the main program of the Festival will present:

The show FOR NOW EVERYTHING IS OK produced by the Krusevac Theatre, based on the play by Natasa Rajkovic “the Window”, adapted and directed by Snezana Trisic, on September 8 at 7:30 p.m.

The show THE DAY WHEN I WAS NO LONGER ME produced by the Belgrade Drama Theatre, written by Roland Schimmelpfennig, directed by Tara Manic, on September 9 at 7:30 p.m.

The show LIFE IS A DREAM by the “Song” Theatre from Sofia, based on the drama by Pedro Calderon de la Barca, adapted and directed by Dina Markova, on September 10 at 7:30 p.m.

The show KONS: THE NEW ERA, produced by Preseren Theater Kranj from Slovenia, based on the drama by Srecko Kosovel, directed by Ziga Divjak, on September 11 at 7:30 p.m.

The show WATCH OUT FOR THE VOID produced by the Croatian National Theatre in Varazdin, written and directed by Romano Nikolic, on September 12 at 7:30 p.m.

The show WHO KILLED JANIS JOPLIN? Produced by the Serbian National Theatre, written by Tijana Grumic, directed by Sonja Petrovic, on September 13 at 7:30 p.m

The festival will close with the author project by Andrea Gavriliu RECIPE FOR PERFECTION IN TOO MANY STEPS THAT LEAD NOWHERE, produced by the Northern Theater Satu Mare – “Mihai Raiku” company from Romania, on September 14 at 7:30 p.m. when the Festival awards will be formerly presented.

In the accompanying program of the festival, the audience will have the opportunity to see:

Radio-show THE SOUNDTRACK FOR AN UNFILMED MOVIE, by the King of Cacak and Nina Bajsic, performed by RadioTeatar Bajsic and friends from Zagreb, on September 13, starting at 10 pm in Banovina, the University yard.

Theater installation for one spectator HEROES 4.33 written by Sasa Dimoski, directed by Dejan Damjanovski and performed by the National Theater “Jordan Hadzi Konstantinov – the Giant” from Veles, on September 9 and 10 in the Grand Hall of the Officers’ Home starting at 8:00 p.m. and 10:00 p.m. on both evenings . The concept of this installation implies the entry of one spectator at a time, each of whom will be guided through the installation as through a museum.

Sales of tickets and ticket sets begin on August 23. Tickets and sets can be reserved every working day by phoning the theater box office at: 018/245 – 472.

On-site testing will be provided for Festival visitors who have not been vaccinated or have no confirmation that they are covid negative.

This years’ festival program will include:

A forum on the topic ROLE AND PLACE OF THEATER IN THE MEDIA SPACE, on September 9 at 12:00 noon in the small hall of the hotel “New City”.

Book launch INTERTEXTUAL KNITTING. ON THE CONSTITUTION OF THE CHARACTER OF LAZA KOSTIC, written by Milivoje Mladjenovic, on September 11 at 5:00 p.m. on the 1st floor in the foyer of the National Theater.

Launch of the magazine for theatrical art TEATRON, on September 11 at 5:00 p.m. on the 1st floor in the foyer of the National Theater.

Launch of the Monograph about Nebojsa Glogovac, witten by Tanja Njezic, on September 12 at 5:00 p.m. on the 1st floor in the foyer of the National Theater.

Launch of the monograph ALEKSANDAR DJORDJEVIC: ALWAYS FROM THE BEGINNING written by Dragana Boskovic, on September 12 at 6:00 p.m. on the 1st floor in the foyer of the National Theater. 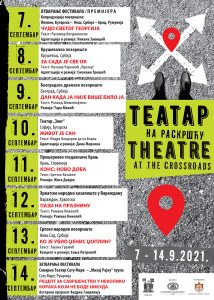