On this occasion, we would like to inform you about the participation of the National Theater in Nis in the humanitarian action of collecting New Year’s packages:

Gathered around the idea of ​​beautifying the upcoming holidays for the children of socially vulnerable families, a group of good people launched a humanitarian action of collecting New Year’s packages, which will go on until December 20. Reception centers have been opened in Subotica, Novi Sad, Sombor, Indjija, Belgrade, Nis, Ruma, and new reception centers are opening every day throughout Serbia.

“It doesn’t take much to participate in the action, it just takes a few sweets, saltines and juices to be put in one decorative bag, along with a nice message that will chear up the family happy to whom the package will be given.” Immediately after the launch of the action, which started on Facebook as a personal initiative, thanks to the good people we woke up, it began to spread throughout Serbia. At the moment, five reception centers are open, and we expect several more soon. All packages that are collected in those places will be distributed to socially vulneralble families who live in that area “, said Branko Prčić, the initiator of the humanitarian action.

All fellow citizens who wish to join the humanitarian action and brighten the end of this unbelivable year for the kids in their towns, can bring the packages at the Open University in Subotica, Sombor Educational Center (Sombor), Treasury Agency in Novi Sad, Painting Studio Maja Zivkovic in Indjija, National Theater in Nis, Buka pod Rumom in Ruma, Press Center in Knez Mihajlova in Belgrade.

All additional information can be found at: 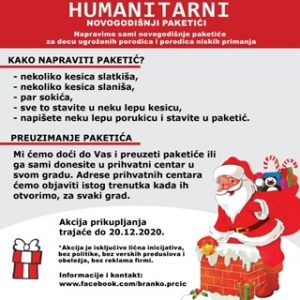